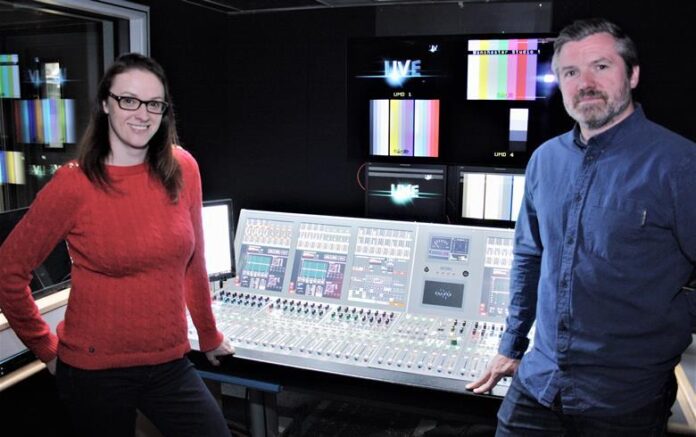 Studio 1, the first broadcast TV studio in the Manchester Studios complex has been launched, this month.

The opening of the new TV studio marks the end of phase one in a project that will see a complex of 13 studios operating at the heart of Manchester city centre by late 2021.

Manchester Studios, part of the wider Enterprise City, tech, media and cultural cluster in the heart of Manchester city centre, spearheaded by Allied London, is emerging as the new TV heart of the city since taking over the old Granada Studios site in 2015. Now reborn for a new era, the revitalised studio spaces will provide some of the best production and broadcast facilities in the UK.

The largest studio in the complex – the 13,000 sq ft Studio 1 – has been fully upgraded to provide integrated galleries, new studio infrastructure as well as introducing a range of new spaces to support audience shows. Changes within the Studio 1 building have provided new production offices; high-end superstar and star dressing room suites; audience holding areas; and, VIP, exec and green rooms.

Studio 1, a self-contained studio building, has received a full technical and fabric upgrade throughout. A new server and a patch room have been created, increasing the efficiency and communication between the studio floor, galleries and other studio spaces.

Both the main studio and annex studio floor have a new fibre and copper infrastructure, which has seen the recommissioning of the studio wall boxes and a full dimming system installed throughout.

The galleries have been remodelled, with custom desks installed to house the 4K operational gallery. Accompanied by full OLED monitoring system throughout the gallery, populated with familiar brands Sony, Calrek, Grass Valley, Riedel and EVS. The studio now offers a vast amount of flexibility and adaptability to ensure all show types can be catered for without compromise.

Anthony Gannon, head of studios at All Studios group and Manchester Studios, said: “This is a really exciting time for Manchester Studios as we move on from the plug-and-play gallery arrangements we worked with in 2019 to having a fully integrated system in Studio 1. The quality and flexibility of the new infrastructure means we will be able to turn around shows faster and deliver better for our clients who are already booking in from July to return to production. The launch of Studio 1 is a great first step in bringing so many existing, high-quality TV studios back into full use and we can’t wait to move ahead now with the next phase of the project to bring back the other five studios of the main M1 studio block.”

Melanie Jones, managing director of the All Studios group and Manchester Studios, said: “Continuing works during the COVID-19 lockdown has presented some new challenges for us, however, we have managed to continue and complete the works with minimal delay. It has given us the perfect opportunity as well to prepare and implement our new setup and processes to offer a bio secure studio space for our clients as the lockdown eases and production can restart. As a stand-alone building Studio 1 is ideally setup to manage studio production in a safe, independent and secure environment. We are already working closely with clients to re-introduce their teams into the space and look forward to seeing the first shows in there this summer.