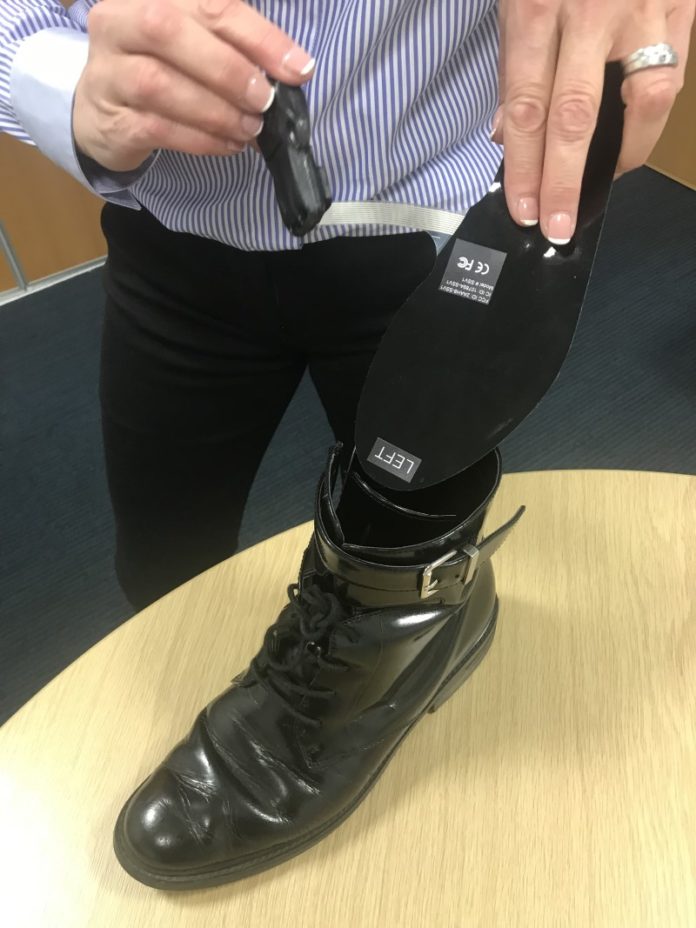 A study by researchers at Manchester Metropolitan University, The University of Manchester and Manchester Diabetes Centre have found an early warning system powered by a smart shoe insole can help prevent the re-emergence of diabetes-related foot ulcers which can lead to complications such as amputation.

One of the challenges for the clinical profession is how to help patients with diabetes avoid developing reocurring foot ulcers on the sole of their feet: one in every fourth person with diabetes will get one in their lifetime and the danger is they fail to heal and become infected over time.

Tragically, up to 30% of patients with a diabetic foot ulcer may go on to require some form of lower limb amputation.

Diabetic patients with peripheral neuropathy – nerve damage in the extremities – experience less sensitivity in their hands and feet and as such run a higher risk that in some common situations, such as walking, sitting or standing, their feet may experience higher than normal foot pressures, causing skin damage to the bottom of the foot and leading to an ulcer.

Researchers ested the effectiveness of an intelligent shoe insole system that tracks pressures and provides instant feedback, prompting users to adjust their behaviour or stance to alleviate or offload the kind of pressure that can cause ulcers.

The results of the study published in The Lancet Digital Health journal show the system reduced the reoccurrence of foot ulcers in patients by 71 per cent over the course of the 18 months of the project.

Lead author on the paper, Dr Caroline Abbott, Research Fellow within the Research Centre for Musculoskeletal Science and Sports Medicine at Manchester Metropolitan University, said: “This is the first clinical trial to test if ‘smart’ or ‘intelligent’ insoles, worn during daily life over a long period of time, can prevent debilitating foot ulcers from recurring in ‘high-risk’ diabetic patients.

“We realised that any active technology that alerts patients to their daily periods of harmful high foot pressures would be a very powerful foot ulcer prevention strategy.

“The benefits of the technology are that the patients are empowered to monitor their own risk themselves and better understand their own foot pressures and then actively offload pressures during harmful periods.The patients with the best compliance and self-management were best protected against ulcers recurring.This finding illustrates the concept of the effectiveness of patient empowerment through targeted technology.”

The shoe inserts were fitted with eight sensors that continually monitored and measured pressure points around the sole of the foot during the wearer’s day to day activities.

Data was fed wirelessly to a companion smartwatch and whenever it was detected that a dangerous amount of pressure had built up, an audio-visual vibrating alert was sent to the watch to encourage the wearer to make immediate adjustments and reduce the pressure on the zone of the foot affected.

This might include the patient walking around in order to spread their weight better over both feet, sit down and remove weight from the affected foot or check their footwear for foreign objects or excessively tight shoelaces.

Dr Abbott said: “Generally, patients reacted well to wearing the smart insole system, although some were put off by having to use digital technology per se and others by the aesthetics of the system as, in our prototype, the sensor pod is clearly visible on the top surface of the shoe.

“Anecdotally, patients said that they learned to pre-empt situations where alerts would generally occur, in other words, they would learn over the months to change their foot positions regularly to avoid alerts occurring in the first place.”

Previous research into diabetic foot ulcer prevention has focused on testing current prevention methods, such as the use of ‘passive’ standard therapeutic shoes and prescription insoles, which accommodate foot deformities and offload high foot pressures.