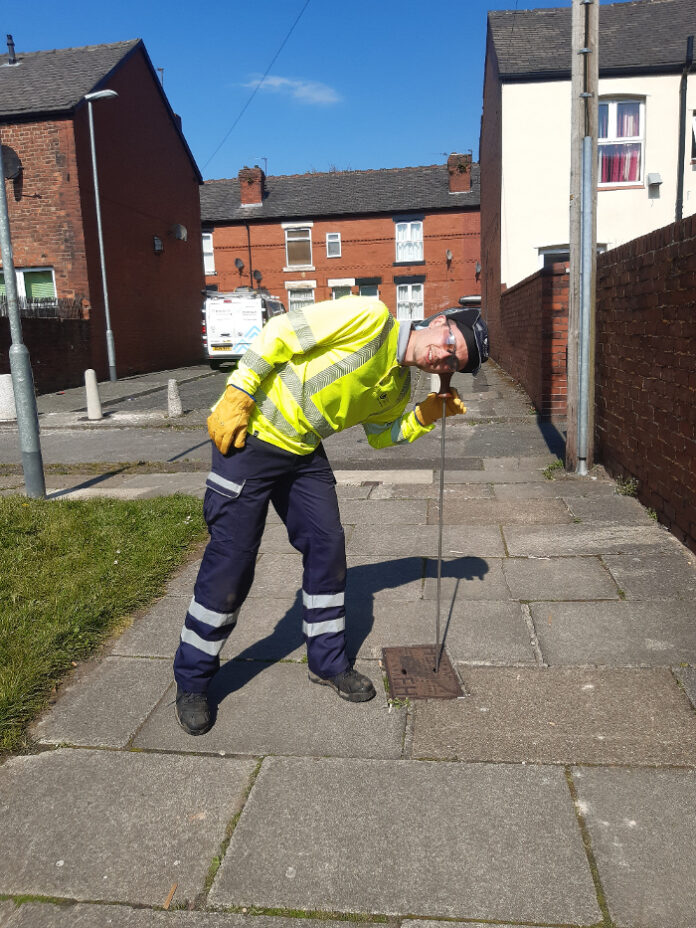 Often seen at night, when it’s quieter, the modern leak detective has many hi-tech gadgets to help in the fight against leaking water mains.

“Listening sticks are still used to listen for auditory cues on the clean water network such as on hydrants and valves,” says 26-year-old Benjamin who lives in Whalley Range.

“But there are also a lot of new and innovative technologies developed to revolutionise the leak detection process. From specially-trained sniffer dogs who can literally smell leaking pipes to permanent loggers placed in pipes to detect sounds in the pipework, we have lots more kit at our fingertips nowadays,” he adds.

Permanent loggers sound an alarm when a noise is heard and a sound file is sent over the 3G network to analysts who then send out a leak detective to investigate further. As well as the real dogs, there’s also a piece of hi-tech kit called FIDO which is a sensor that is left out overnight clamped to the pipework listening for sounds when water use is at its lowest.  United Utilities teamed up with inventors as part of its Innovation Lab challenge to develop FIDO which is now in use around the globe. The FIDO sensors are really sensitive and they use machine-learning and artificial intelligence to pinpoint the location and even the size of a leak just by the noise it makes.

With 26,000 miles of pipework criss-crossing the North West, leak detection is a constant job. Benjamin and his leak detective colleagues have saved 530 million litres in repaired leaks since April 2021.

Benjamin comments: “Leak detection can often be a real challenge. It is rare for the water from a leaking underground pipe to actually show above the surface. Most water leaks soak down into the ground. Many pipes pre-date the computer age, and the precision GIS mapping we have now, meaning there can be inconsistencies.  This can make it harder to pinpoint a leak when you don’t know the exact positioning of the pipework.”

Working for United Utilities has opened Benjamin’s eyes to the amount of work required to keep the region’s drinking water flowing from residents’ taps.

“Learning about the journey that water makes through wastewater treatment to our service reservoirs through the network to our customers taps, has made me a lot more conscious of my own personal water consumption and the effort it takes to deliver wholesome water to every person across the North West,” he explains.

United Utilities’ network optimisation manager, Hannah Louise Wardle, said: “It’s fantastic to see the open-mindedness and enthusiasm from these new apprentices and their passion to embrace new technology to deliver a great leakage reduction. Our new leakage apprentices are already valuable members of the team.”

In its battle to beat water leaks, United Utilities has been working hard to get leakage to its lowest level ever. The company has committed to reducing leakage by a further 15 per cent by 2025.