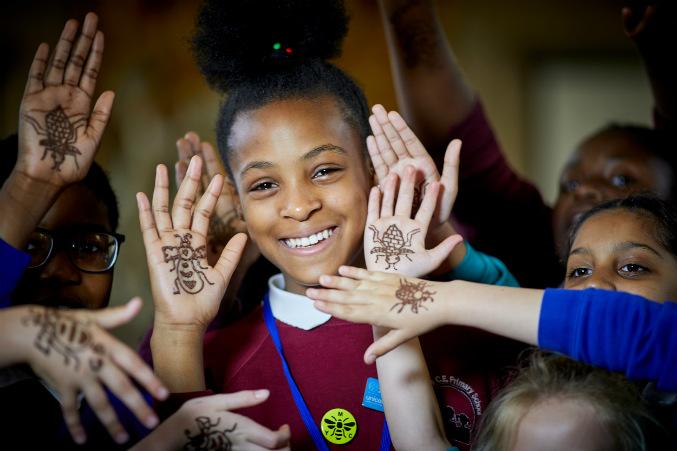 These are just a sample of the views from Manchester youngsters who came together to debate what community meant to them – and play their own role in the city’s recovery a month after the terror attack.

The debate, held in the city council chamber, involved primary pupils aged 9-11 from Moss Side and Wythenshawe and ended with the youngsters having their own henna version of the iconic bee tattoo. The same image that only weeks ago saw record numbers of people queuing for across the city for a permanent inking.

One of the most poignant comments came from Sohaip Alshabani, age 11, from Moss Side, said: “None of the terror attacks would have happened if everyone respected rights… and with your right not be harmed there could never be any war.”

And 11-year-old Maurissa Rainford, said: “There are lots of different cultures here and after it (a terror attack) people might not show the same respect, which I don’t think is right. But the impact on the community here is that even though people may have been scared, people are coming back together again.”

This was echoed by Jeneah Barnett, also in year 6, who added: “Manchester will reunite and it will work together.”

Earlier in the day the children from St Mary’s C of E Primary in Moss Side, Haveley Hey in Wythenshawe and The Willows Primary, also in Wythenshawe, worked together – in a conference they had organised themselves to talk about their part Unicef rights-respecting programme in schools.

This programme is based on the United Nations Convention on the Rights of the Child (CRC) and has two levels . All three of the schools have reached level 2, which means that they have shown that the CRC principles are fully embedded into classroom life.

Jenny McGarry, head teacher at St. Mary’s CE Primary, Moss Side, said: “Our children come from diverse backgrounds and they know the value of respecting one another. That’s why it was so important for them to share that message today. Working across three schools in Moss Side and Wythenshawe gives us a great opportunity to make this a reality.”

Sir Richard Leese, Leader of Manchester City Council, said: “I’m incredibly proud – and humbled – by the loyalty and generosity of spirit shown by these youngsters. These children speak from the heart and from their communities and that is the most powerful message of unity.

“I have listened to everything they said and will feed it back to the next full council meeting.

“The children, have played a role in democracy and the Our Manchester ethos where we want our own communities to drive the vision for the city.”