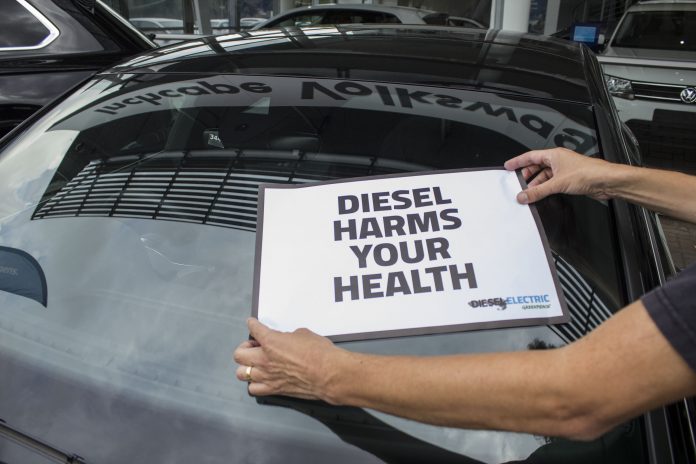 Greenpeace volunteers in Manchester were in action in Stretford yesterday to raise public awareness around air pollution, targeting Volkswagen diesel as the prime suspect.

Recent studies show the levels of air pollution in Greater Manchester are currently both lethal and illegal.

Analysis by King’s College London has estimated that 1.6 million life years will be lost in Greater Manchester in the coming century due to its poisonous air. This is equivalent to each of us having our life expectancy reduced by six months.

Greenpeace singles out the internal combustion engine as the chief culprit, advocating Clean Air Zones, along with support for electric cars, better public transport, as well as regulating car companies, as the paths towards a solution. More about this can be found on the Greenpeace website where there is also a national petition.

Martin Porter, a volunteer with Manchester Greenpeace at the action in Stretford yesterday, said:

“Air pollution is not just an environmental threat, it’s a public health risk. More diesel cars are produced by Volkswagen UK than by any other company. That means they contribute more to the toxic air we all breathe than any other car company. It’s time for them to ditch diesel.”

While the Volkswagen showroom in Stretford remained closed throughout the day, notes were left on vehicles and posts sent via Twitter indicating the Greenpeace campaign message.

“Volkswagen have cheated customers, lobbied to weaken air pollution regulations, while they put more toxic diesel cars on the road than anyone else. Amazingly Volkswagen UK thinks diesel has a “great future'”. We disagree. Diesel fumes stunt the growth of children’s lungs and causes strokes, heart disease and diabetes in older people. This is Stretford, Manchester. Isn’t it time Volkswagen UK stopped giving kids asthma and instead ditched diesel altogether?”