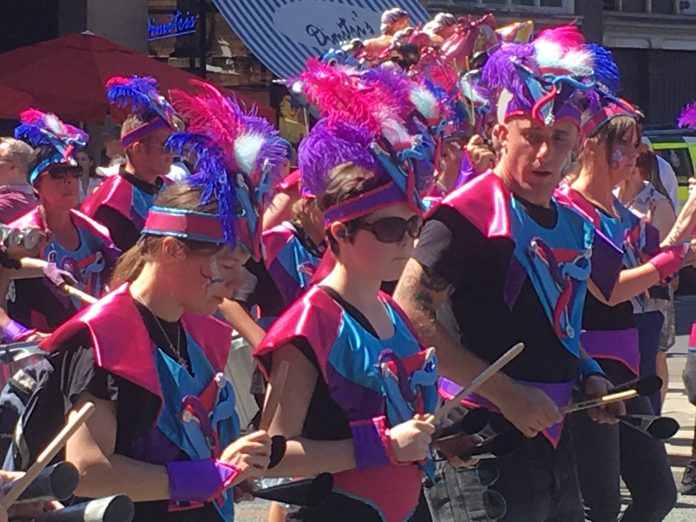 The Crowds were six or seven deep as on the hottest day of the year so far, Manchester celebrated its own special day.

Just three weeks after the terrorist attack on the Manchester Arena, the parade began at 1.00pm with a tribute to the victims as  twenty two children holding balloons, one each to represent each of the victims marched to polite applause at the head of the annual parade.

The group held a banner reading “Manchester remembers 22.05.17” and were followed by uniformed members of the city’s emergency services, honouring their response to the attack.

An estimated 100,000 crowd then witnessed a colourful medley of marchers with the theme Abracadabra as 22,000 marchers representing over eighty community groups marched from Liverpool Road along Deansgate, up Peter Street passed Albert Square, down John Dalton Street back along Deansgate and finishing in Exchange Square.

Other highlights included the Manchester Malayalee Association whose fire headdresses came all the way from Brazil, and were part of a celebratory ritual of the Keralan deity Theyyam. The head pieces themselves were made by students from the Rio de Janeiro-based carnival company Spectaculu.

Stanley Grove Primary Academy and Rushbrook Primary Academy brought back to life the story of Maharajah the elephant, who – unable to fit on a train – reportedly walked all the way from Edinburgh to Manchester to be part of the Belle Vue Zoological Gardens.

Part of the ELEVATE artists development programme, the Europia group brought wild magic to the streets of Manchester inspired by their Eastern European roots as a commuter in his car magically transfigures into a living tree!

And The Wiltz Bee flew through the parade, led by a group from the Manchester Chinese Centre. The bee, which is similar to the iconic emblem of our city, was sent over from Luxemburg by the people of Wiltz to show their solidarity with the people of Manchester.

Now customary for Manchester Day, the event spilled over filling the public squares as the creative canvas was stretched across the city centre for the afternoon. The crowds were spoilt by a spell-binding array of performance and entertainment – along with delicious food – in St Ann’s Square, Exchange Square and Cathedral Gardens.

Highlights in the squares included, The Magic Circle in Exchange Square, where amateur magicians were put through their paces in front of the Manchester Day crowds. The acrobatic stunts of Circus House wowed the crowds, while the day’s finale – a feat of escapology from Dr Diablo – kept the crowds holding their breaths!

Greater Manchester Mayor Andy Burnham said it was a chance to celebrate the city’s “incredible spirit”.

“It’s right and fitting that Manchester Day is devoted to those who lost their lives and those that continue to live with the aftermath of last month’s attack.”

Cllr Pat Karney, Chair of Manchester Day, said: “Magic was in the air today. It has been an incredibly special day where the whole of Manchester has come together as one to celebrate our city and our shared history.

“The sheer ambition of Manchester Day is incredible. It seems to grow and grow each year and now we’re in our eighth celebration it feels like the whole of the city has come out with everyone they know to the city centre to enjoy the show. It’s always fantastic to see families and friends come together and share the day.

“The parade, as always, was spectacular in its vision and creativity. Of course, this year we couldn’t let Manchester Day go by without honouring those who lost their lives during the Manchester Arena attack – and of course our emergency services. Today’s tribute was a fitting remembrance.”