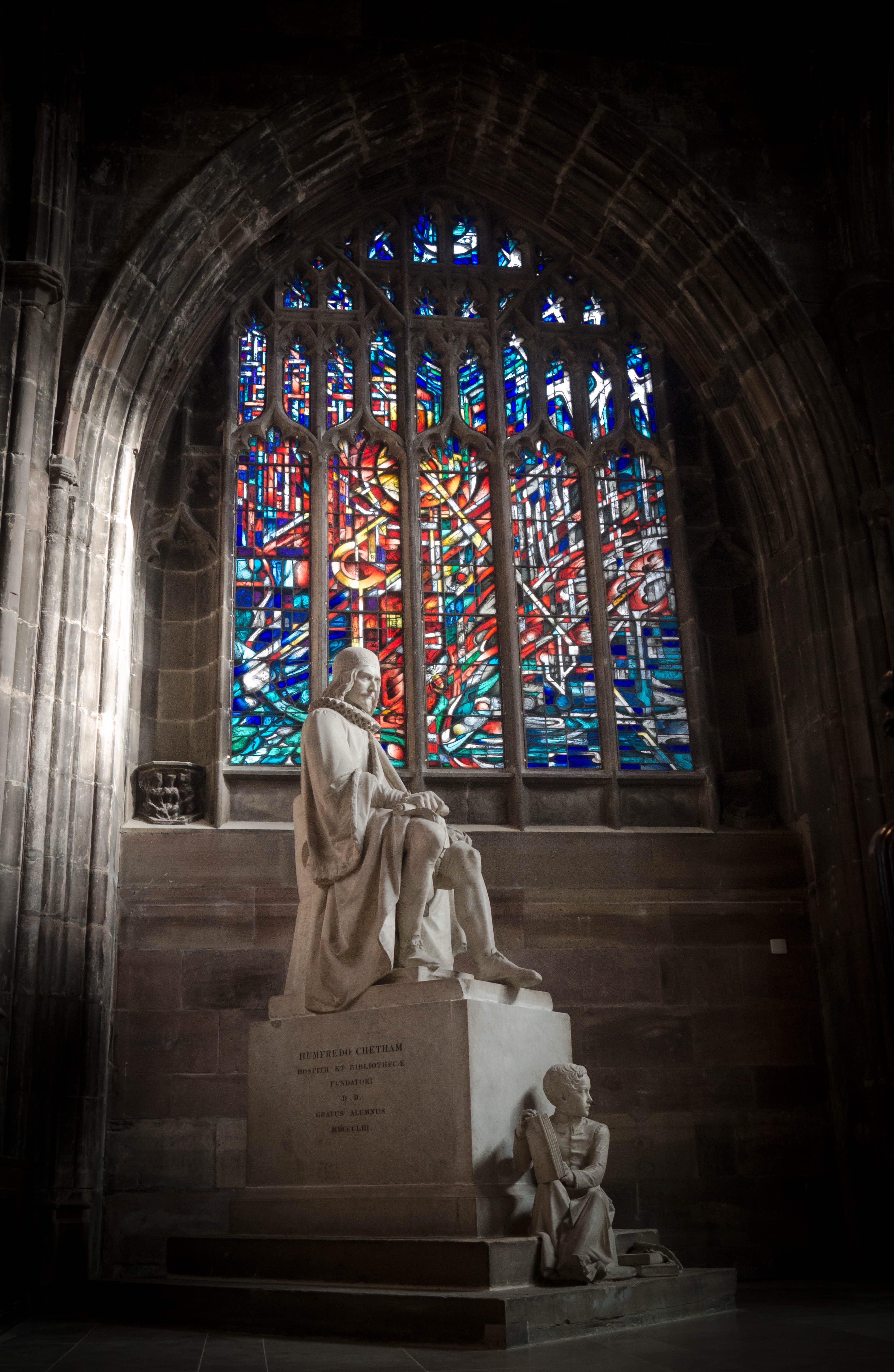 Manchester Cathedral has installed a new stained-glass window at the east end of the Cathedral. The Dean and Canons are grateful to The Oglesby Charitable Trust who have kindly funded the new Hope Window.

Following extensive damage to the Cathedral windows during the second world war, the Chapter took the opportunity to establish a design strategy for future stained-glass windows in the building. This policy took account of liturgical, architectural and environmental influences and encouraged the use of modern forms of artistic expression.

The Hope Window was the last stained-glass window to be installed to fulfil the post-war aspirations for new glass at the east and west ends; it completes the long east-west views along both north and south aisles, as well as defining the special character of the east end.

The Dean of Manchester, The Very Reverend Rogers Govender says:

“We are delighted with this new addition to Manchester Cathedral. The Hope Window completes the East end of the cathedral and with its message of hope brings a lot of joy and happiness to those who view it. We are very grateful to Michael Oglesby and the Trustees of The Oglesby Charitable Trust for all they do to support this Cathedral and City”.

The abstract design of the new window revolves around the themes of hope, innovation, growth and new life. The statue of Humphrey Chetham, founder of Chetham’s school and library sits by this window, with a young student seated at his feet, book in hand. Chetham is at the heart of the early development of Manchester, and the window reflects a sense of the character of Manchester and its vibrancy, as a place where young people can grow and flourish.

To the north side of the new Hope Window is Margaret Traherne’s ‘Fire Window’ commemorating Manchester’s part in the world wars and is symbolic of renewal and reconciliation. To the south side is Linda Walton’s ‘Healing Window’.

The Hope Window was designed by Glass Artist, Alan Davis.

“It has been a great privilege to create the Hope window for Manchester Cathedral. My initial thoughts on the brief were about growth and regeneration, and although the window is abstract I have included tree and flower forms which move upwards through the central lancet. There is a pattern of woven fabric, relating to the textile industries and to the concept of God as ‘weaver’ of the universe. The tilted cross in the centre of the window symbolises Christ’s final journey, while the angle also adds dynamism, a sense of forward movement. To me, the window represents a journey towards new life”.

“The Cathedral plays an important role in the life of a City. It is a symbol of the values that are at the heart of a properly functioning municipality and its people. It reminds us of our responsibilities as citizens, and of the strong moral standards which should exist in our everyday life, guiding our relationships with each other.

“The connection between what the Cathedral stands for, and the people, should be strong, and for this reason it is important that from time to time, we show this support in a tangible way. It is in this spirit that the Oglesby Charitable Trust has made the gift of a new stained glass window. The new window is, in our view, an outstanding piece of art but, also, it is an important symbol of the strong bond which exists between City and Cathedral.”

Greater Manchester shines a light on the hidden practice of FGM