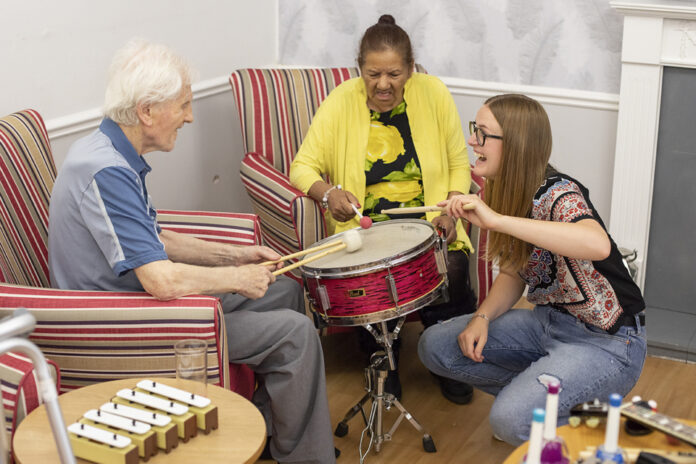 As part of its ongoing ‘Untold’ digital film series, Manchester Camerata today [21 September] release the second episode which explores early onset dementia inspired by the life of Keith, a Wigan-based man who the Orchestra met at one of its creative music-making sessions in 2018.

Previously a coach driver for football clubs across the northwest, a member of the grenadier guards and an avid music fan, the film tells of Keith’s personal account of how dementia affects the everyday life of him and his wife Joan, as well as the transformative ways in which music helps him. The film offers a visual and musical response to early onset dementia, creating a narrative inspired by Keith’s experience to raise awareness on World Alzheimer’s Day.

The film comes just weeks after the Orchestra launched its brand-new Music Café at the Monastery in Gorton, extending its ground-breaking community work to support those living with dementia and at-home carers. The Camerata continues its dementia research partnership with The University of Manchester which has proven first-hand how music empowers people living with dementia.

Keith said:
“I was blown away with the production. It brought me to tears. The way Neil Bell portrayed me was so true and lifelike. Neil’s actions throughout the production were so lifelike, people in my bubble all said it was me to a tee. Also, the way Julie Hesmondhalgh did the voiceover was excellent.

Thank you again for all everyone’s efforts in keeping me safe and comfortable throughout our time together. I don’t say it often but thank you and love to everyone for helping me understand my dementia. It was difficult to explain just how my brain works to people but you executed me perfectly.”

Directed by award winning Manchester-based filmmaker, Paul Sapin, each film in the ‘Untold’ series tells a different story with each one bound by the same goal – ‘to heal through music’ (Gábor Takács-Nagy, Music Director). The series addresses universal themes of identity, belonging, loss, love, community and inequality with music performed by Camerata musicians very much at the heart of each one.

The first episode in the series came out in October 2020 and featured Caroline Pether, Leader of the Manchester Camerata, who revealed her own journey to acceptance as a gay, Christian woman.

Untold marks a bold and creative departure for the orchestra fusing music, spoken word, film and multi camera work both for the first time and at a time when live performance is heavily restricted but much needed. These films enable Manchester Camerata – an orchestra that puts community impact front and centre – to remain connected to the needs of its musicians, collaborators, audiences and the wider community.

The Music Café is held weekly in the stunning Great Nave at the Monastery in Gorton, East Manchester, where the orchestra is based. The cafe is run as a weekly music workshop to help support local residents who are living at home with dementia as well as providing much needed respite and support for their carers and family members.

During these sessions participants are encouraged to share and reconnect with their love of music, no matter the genre: chatting about, creating. dancing and even performing their own songs with the full support of Manchester Camerata’s professional team of music therapists and specially trained musicians. These weekly events are also an opportunity for carers to understand how they can also use music to support their loved ones with dementia when they’re back at home. These bespoke two-hour sessions are free to all participants, and are fully accessible, held in Covid-safe conditions at The Monastery from 10.30am every Wednesday.

Have you ever taken a photograph whilst visiting Manchester Cathedral?