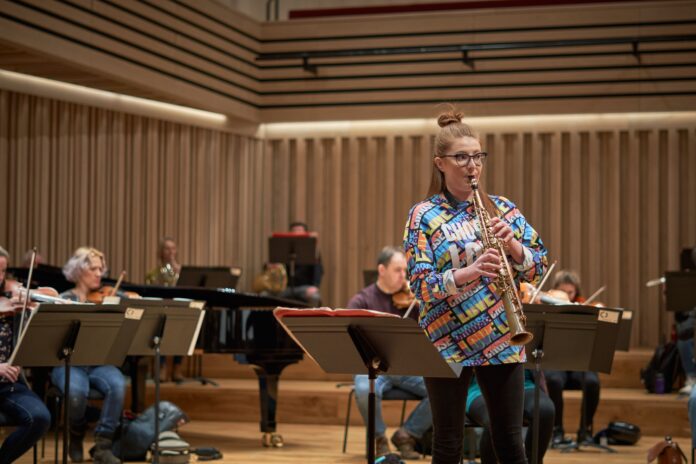 2022 marks the 50th anniversary of Manchester Camerata, an innovative orchestra which has continued to push boundaries and challenge traditions throughout its history.

The Orchestra today reveals some of its plans for the anniversary year which sees them perform all across the UK with artists ranging from Jess Gillam and Jean-Efflam Bavouzet to DJ Afrodeutsche and Joy Division’s Peter Hook.

This year also sees the Camerata continue its popular short film series UNTOLD as well as ground-breaking community projects such as Music in Mind and Hidden Histories.

Bob Riley, Chief Executive of Manchester Camerata, said: “Our 50th anniversary is an opportunity to celebrate what has happened so far as well as our plans for the future. Everyone leaves a mark at the Camerata, be that a musical style, a way of thinking, or something else distinctive. We have countless anecdotes, recordings and community projects as part of our collective legacy. We want to invite our audience to join us as we reflect on our history and initiate new partnerships across the year to come.”

JESS GILLAM AND WIGMORE HALL DEBUT
Kicking off the year is a series of concerts with the Manchester Camerata’s Resident Artist Jess Gillam in Manchester’s Stoller Hall [11 March] and London’s Wigmore Hall [20 March], which will be the Orchestra’s debut at the iconic venue. Gillam will perform Alexander Glazunov’s Concerto in E-flat major in a programme that also includes Daniel Kidane’s Be Still, a work commissioned and premiered by Manchester Camerata last year. Jess returns to the stage with the Camerata in May for a performance at King George’s Hall, Blackburn [20 May] and The Coronation Hall in Ulverston [17 Sept].

Jess Gillam said: “It’s always an absolute pleasure and honour to work with the orchestra – the musicians and the whole wider team alike. The ethos and spirit of the organisation and their commitment to sharing the wonders of music with every part of society is extremely inspiring. I’m looking forward to joining them on stage in the new year as part of their anniversary celebrations – here’s to the next 50 years!”

MOZART, MADE IN MANCHESTER
The Orchestra releases the sixth volume of its popular Mozart, Made in Manchester recording series on Chandos with Music Director Gábor Takács-Nagy and pianist Jean-Efflam Bavouzet [1 April]. The series also returns in concert form, with performances at Stoller Hall on 25 March and 23 September. Gábor Takács-Nagy will be featured in the Camerata’s next instalment of UNTOLD, its short film series which uses music to share personal stories. The episode will see Gábor talk about his monumental move from playing the violin to conducting, a pivotal moment in his career following 17 years leading the Takács Quartet. In this film set to a soundtrack chosen by Gábor, the Camerata explores the undeniable power of music and how music provided spiritual medicine for Gábor at a time most needed.

PREMIERES AND NEW COLLABORATIONS
Other highlights of the year include the world premiere of a new commission by composer Alex Ho as part of the Royal Philharmonic Society Composer programme, which will be part of an intergenerational performance by the people of Gorton, Manchester, where the Camerata is based [17 Nov].

The Camerata takes to the stage with Manchester-based music duo Space Afrika for a performance of Steve Reich’s Music for 18 musicians at Stoller Hall [14 May]. The Orchestra is also working with Manchester-based composer, producer and DJ Afrodeutsche on a new project and takes to the stage with cabaret star Le Gateau Chocolat on his show Pandora. Details about both projects will be announced soon.

Manchester Camerata continues to push boundaries with Unquiet, its new series focussing on the intersection between contemporary classical and electronic music culture. Curated by Robert Ames in partnership with NEWFORM Music, the series will feature new commissions from cutting edge artists and composers.

OTHER HIGHLIGHTS
The Orchestra returns to Huddersfield Town Hall for a concert of Bach’s St John Passion with the Huddersfield Choral Society, conducted by Gregory Batsleer [2 April]. Audiences will also have the opportunity to watch a screening of Charlie Chaplin’s 1921 silent film The Kid with the Camerata performing the score live at HOME in Manchester [16 June]. December 2022 will see the return of the Manchester Camerata’s popular Festive Happening concert at Manchester’s Albert Hall and a performance of Handel’s Messiah at their home The Monastery in Gorton.

Other performances of the show are scheduled all across the UK throughout the year. The Orchestra also has performance plans with Opera Up Close, Salaam Festival and Orchestras Live in addition to other R&D projects, all of which will be announced in due course.

ONGOING PARTNERSHIPS
2022 also sees Manchester Camerata continue collaborations with various partners, including Nevill Holt Opera where the Orchestra performs Puccini’s La bohème [8-14 June] and a return the stage with Peter Hook for his The Sound of Joy Division Orchestrated shows at the 02 Apollo in Manchester and the London Palladium [14-15 Oct]. Peter Hook will be featured in the Camerata’s UNTOLD short film series later this year. Manchester Camerata present two big performances of Haçienda Classical at the Royal Albert Hall [13 May] and Castlefield Bowl [8 July] to mark the 40th anniversary of the series, which has seen the Orchestra perform at Glastonbury, Isle of Wight Festival and more.

EDUCATION AND COMMUNITY WORK
In addition to its performance work, Manchester Camerata also continues its ongoing partnership with the Royal Northern College of Music where it takes part in chamber music workshops, a conducting weekend and other opportunities for students. A number of musicians in the Camerata, including its leader Caroline Pether, were students at the College.

Following its move to The Monastery in Gorton East Manchester, Manchester Camerata continues to embed itself in the local communities there through its participant-led music-making programme.

The organisation continues its successful Music in Mind programme for people with dementia and their carers. Two new PhD studies will begin later in the year, continuing our decade-long partnership with the University of Manchester and its research teams, led by Professor John Keady. The Camerata will be working in partnership with other tech and dementia groups to further develop its Music in Mind: Remote training app and online resource for carers for wider impact across Greater Manchester.

In its younger people’s programme, Camerata is partnering with Gorton’s Hideout Youth Zone to continue their creative song-writing choir. A series of workshops in St Peters High School in Longsight will bring together students and multi-genre artists in grime and hip hop, such as artist LayFullStop, to help inspire the students in all aspects of musicianship. Composer Lavender Rodriguez leads the Camerata’s Hidden Histories schools project, which celebrates the works of underrepresented composers of the past.

Other schools’ work outside Greater Manchester includes projects with long-term partners Orchestras Live in the North East, The Entrust Partnership Stoke, Staffordshire and Telford, plus inspiration projects in Sefton and Knowsley.

How to comfortably transition back from virtual to in-person meetings