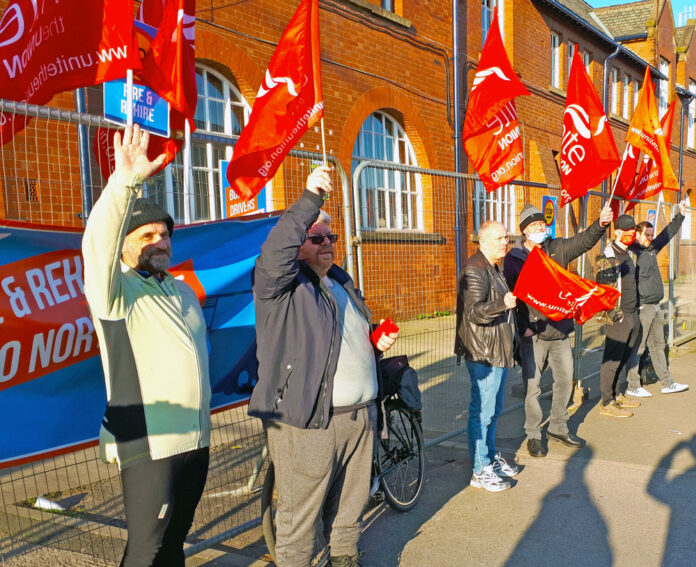 agreeing a deal which will end one of the country’s longest-running industrial disputes.

The deal was presented to a mass meeting of the drivers, members of the UK’s leading union, Unite, held today at the company’s Queens Road depot. This was followed by a workplace ballot where the union’s members voted overwhelmingly to accept the negotiated agreement bringing to a close the 85 day strike.

Crucially, the company has agreed to Unite’s demand that it will never use fire and rehire in any form, a move that will safeguard pay and conditions for thousands of employees across the Go Ahead Group.

The drivers began all-out, continuous strike action on Sunday 28 February, and lasted a total of 82 days. The strike, which saw the union deploy its expert organising team, drew support from across the North West, including from mayor Andy Burnham and former Coronation Street actor Julie Hesmondhalgh.

Nigel Featham, Managing Director, Go North West, said: “We are pleased to confirm the end of all industrial action at the Queens Road depot in Manchester.

A new collective agreement has been reached. This positive outcome for the depot, its employees and stakeholders follows a period of intense and productive negotiations between senior representatives of Go-Ahead and Unite.

The deal agreed enables the introduction of revised working practices under a new Collective Agreement providing a solid foundation on which to build a sustainable future for the depot.

Go North West now looks forward to building a positive working environment for all colleagues at Queens Road and continuing to improve services for our customers and communities.”

Unite general secretary Len McCluskey said: “This is a tremendous victory by Unite’s members at Go North West who through their dedication, solidarity and commitment have defeated the attempt to fire and rehire them.

“I pay tribute to them, sustaining a strike during the challenge of lockdown, and thank this incredible community for their brilliant support through these long weeks which definitely helped keep heads held high.

“We’re also delighted to have secured a clear commitment from the Go Ahead Group that fire and rehire will never be used by them, bringing relief to thousands of workers who feared that they were next.

“Once again, the best defence for working people in this country is their union.

“This dispute should also send a clear and unequivocal message to all employers that Unite will never accept fire and rehire for our members – that we will do everything in our power to prevent it, and we will win.

“The government itself has described fire and rehire as a `bully boy practice’ but the only way to guarantee UK workers are protected from this pernicious practice that’s ripping through our workplaces is for the government to follow the lead of other European countries and ban it once and for all.

“Urgent action is needed to strengthen the UK’s weak laws because it’s simply too easy for employers to make brutal changes to contracts, sometimes taking thousands of pounds from workers’ wages.”

Hidden damage to lungs from Covid-19 revealed in new study