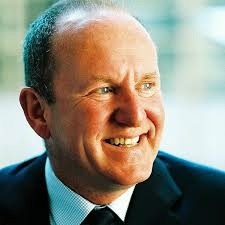 The Manchester born author Ian Livingstone, who made millions on Dungeons & Dragons, and unleashed Lara Croft and Tomb Raider on the world has been has appointed as a Creative Industries Champion by the government.

The sixty four year old who grew up in Rusholme, the only child of a Belgian mother and a salesman father who had met during the war, was educated at Altrincham Grammar School and Manchester University before moving to London to work for an oil company.

At the age of 25, he changed his life, moving into a flat in Shepherd’s Bush with his old school pal and partner-in-games Steve Jackson, where they set up Games Workshop, manufacturing and retailing fantasy games and models. The two routinely worked 18-hour days, returning home from their day jobs to run the games business before becoming the European distributor for the Game Dungeons and Dragons.

They opened their first Games Workshop in Hammersmith in 1977, churning out the phenomenally successful Fighting Fantasy series of role-playing gamebooks for children that went onto sell more than 14 million copies in 23 languages.

They sold the Workshops in 1991 whereupon Livingstone embarked on what was to become a very short retirement before investing in a computer games company. In 1996 he ‘ discovered’ Lara Croft, spotting an artist’s drawing of a big-breasted Riot Grrrl on a visit to a games development company and bought the concept.

His appointment was announced last night as part of the launch for Create UK, a strategy designed to improve both the skills and profile of all creative industries, including games, TV, film, fashion, publishing and more, as a unified sector.

My personal goal is to get everyone in the country to understand the value of creativity for its cultural, social and economic impact – particularly in games, which have never been seen in the best light by the media or within government. I want to show the people and the government that it’s a fantastic career choice and it’s a great investment opportunity for the financial community.”