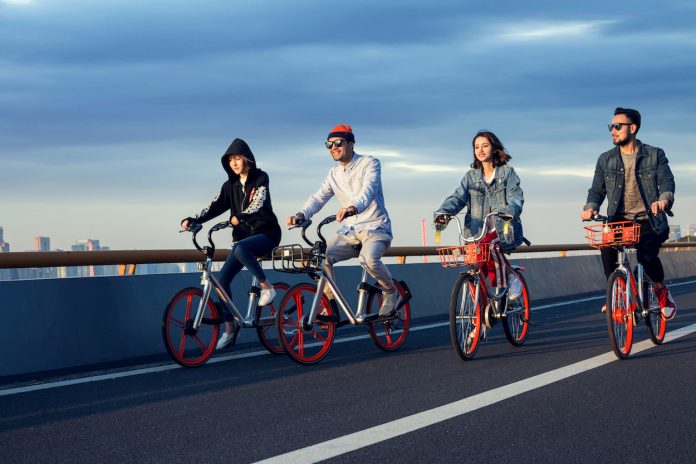 A European-first cycle hire scheme, which will help make cycling a more convenient and attractive way to travel in city centres, is coming to Manchester and Salford.

Greater Manchester political leaders have welcomed news that urban bicycle sharing service Mobike is launching a six-month pilot scheme on Thursday 29 June, which will see 1,000 bikes made available for public hire in central Manchester and Salford.

Mobike is the world’s largest bike-sharing company, running cycle hire schemes in 100 cities across Singapore and China, and the Manchester and Salford trial is the first by the business outside Asia.

The scheme’s unique bike design, built-in smart lock and cashless smartphone app system allow cyclists to pick up and drop off hire bikes at any convenient legal cycle parking location, rather than needing to be parked at dedicated docking stations.

The scheme has been welcomed by the Greater Manchester Combined Authority and Transport for Greater Manchester (TfGM), with the potential to support the region’s Cycle City strategy, helping boost the number of journeys made by bicycle, contributing to regional targets to improve air quality, reduce emissions and improve public health.

Mayor of Greater Manchester, Andy Burnham, said: “As Mayor I want to see many more people swapping their cars for bikes in Greater Manchester and I will take a positive approach to promoting cycling across our city-region. This scheme could help make cycling more accessible to people, but it is an untested idea in the UK and we will need to keep this under review.

“We’re conscious that our city centre is a complex and busy area already, so TfGM has been working hard to establish a voluntary code of working with Mobike to make sure the service operates in a way that doesn’t inconvenience other road users, pedestrians or city centre traders.

“If successful, it could play an important part of our long-term plans for cycling in the region and for making travel easier and more sustainable.”

The Mobike app enables users to rent a bike nearby, locate it using inbuilt GPS mapping and unlock it automatically by scanning a QR code on the bike.

Journeys are charged per 30-minute period, starting once the bike has been unlocked and ending once it has been locked again.

Bikes will initially be available at popular sites such as railway stations and university campuses and Mobike will use usage data analysis to redistribute them efficiently on an ongoing basis to meet user demand.

The Manchester and Salford pilot is the first non-docking station scheme of this scale in the UK and will not be publicly funded or subsidised.

The Leader of Manchester City Council, Sir Richard Leese, said: “We are excited that Manchester has the opportunity to be at the forefront of trialling this cutting-edge, app-based cycle hire scheme in the UK.

“This is another way in which we can encourage residents to choose active, environmentally friendly travel and we look forward to working closely with Mobike and Transport for Greater Manchester in the coming weeks, to examine and assess how the scheme will work in practice.”

Salford City Mayor, Paul Dennett, said: “The Mobike trial is a great initiative helping people get around the city region easy for work and leisure without having to own their own bike.

“Mobikes are a green, low-carbon and healthy way to travel in Salford, where we’re investing £10 million in cycling and off-road cycling infrastructure.

“Bikes are proving more and more popular in urban areas around the world and it is great to see Salford tapping into this trend with our sister city Manchester.”