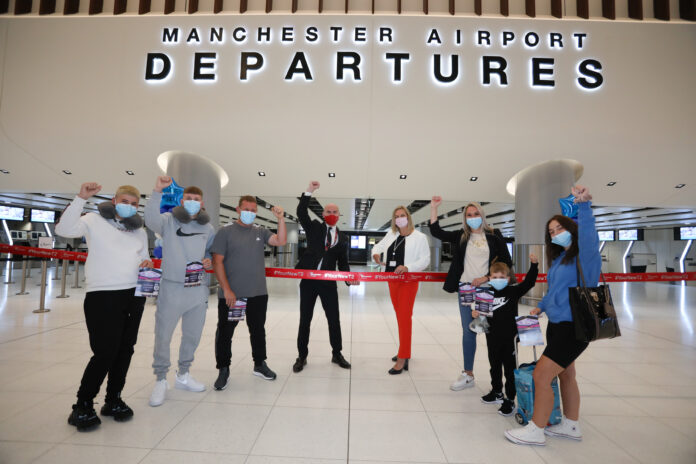 A Jet2.com flight to Menorca was the first to take-off from the expanded Terminal Two, which is the centrepiece of the hub’s £1bn Manchester Airport Transformation Programme (MAN-TP).

Work started on the transformation in 2017 and – despite a delay of more than one year to the opening as a result of the pandemic – the facility was officially opened by Manchester Airport’s Managing Director Karen Smart and Jet2.com’s General Manager at Manchester Airport, Marc Burns, at a ribbon-cutting ceremony today.

Passengers then had their first opportunity to sample the new terminal’s state-of-the-art facilities, including a worker bee inspired honeycomb lighting feature and a giant media wall.

A range of new shops, cafes, bars and restaurants also opened their doors today, with more to open throughout the week as passenger numbers increase.

In true Manchester Airport style passengers were treated to a range of entertainment from local bands and a DJ. Plus, a prize draw giveaway for Jet2.com flights and 1903 Lounge passes.

The first passengers through the doors going to Menorca were the Thompson family from Preston, Lancashire. It consisted of mum Emma Thompson, dad Gary Thompson and children Brad, Ben and Lenny.

Gary Thompson commented on being the first passengers through: “It was a big surprise to be the first passengers in Manchester Airport’s new Terminal Two. It looks very posh, lovely and modern. We only travel once a year and have been through all the other terminals, but this new one is definitely better than anything we’ve seen before.”

Two further Jet2.com flights will depart from the terminal today, and from tomorrow, TUI passengers will join them. It is hoped that further airlines will transition to operating from the new terminal in the coming weeks as demand for travel increases, with a government announcement due tomorrow on its traffic light lists for travel.

“This is a hugely significant milestone for our airport, our city, the North as a whole and the wider recovery of the travel industry.

“After a hugely challenging 16 months, we are delighted to be delivering some positive news and welcoming the first passengers into our new terminal extension.

“When we first announced our £1bn transformation programme in 2015, we set out a vision to create state-of-the-art facilities that provided a first-class customer experience and cemented our role as the UK’s global gateway in the North.

“It is clear to see that vision has been realised and I would like to thank all our colleagues and partners who have worked on the project since the start.

“The impact of the pandemic on the travel industry means we are not able to immediately welcome as many customers and airlines into this fantastic new facility as we would have hoped. However, as Government restrictions continue to be eased, and travel to more destinations is opened-up in the weeks ahead, we will be making further announcements about the carriers and retailers operating from Terminal Two.”