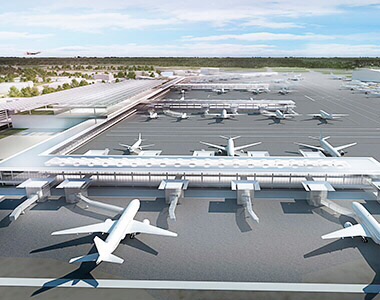 Passenger numbers at Manchester Airport continue to increase as February saw 1,494,451 people travel through the UK’s third biggest airport in a bid for winter sun and half term breaks.

The year on year increase compared to February 2015 of 11% sees the rolling annual total of passenger numbers climb to 23,363,229. Popular destinations for sun seekers include Dubai, Orlando, Tenerife and Palma.

The busy February saw an increase of over 1,000 aircraft movements, clearly showcasing the demand from people wanting to fly direct from their local airport.

As well as having more passengers than ever before, the UK’s Global Gateway from the North has the most diverse destinations in its history. It offers a range of long haul destinations that no other UK airport outside of London has including: Miami, Boston, Beijing, Hong Kong, Singapore, Los Angeles, Jeddah and Atlanta.

Ken O’Toole, Manchester Airport’s Managing Director, said: “It is pleasing to see so many passengers choosing to ‘Fly Manchester’ in February and the growth is testament to the continued hard work of our aviation team and strength of our catchment area. With over 23m passengers coming from as far north as Scotland, and as south as the Midlands, Manchester Airport has the demand and capacity to offer passengers a wealth of destinations and options to suit every traveller.”
As well as passengers wanting to escape the cold and go on half term breaks, February also saw people taking romantic Valentine’s Day breaks with Paris and Amsterdam also being popular destination choices.

The rolling annual increase in cargo carried is also up by 8%, with 103,792 tonnes carried.

Madeira increased 39.5% YoY and the Canary Islands 13.6%. Planes departing and arriving at the airport were 1.7% fuller than in February 2015. Finally Bournemouth Airport’s 28,167 passengers in February took its rolling 12 month total to 723,415 which represents 9.7% growth over the previous year.

Read All About It: The Times Newseum is here in Manchester