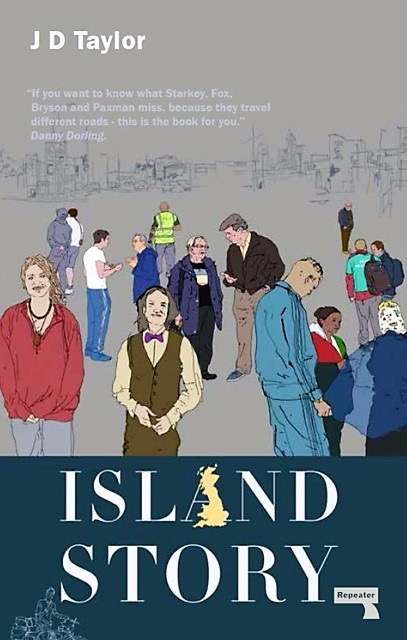 A political travelogue based on a journey round the UK on a rusty bike?  We couldn’t resist and caught up with author Dan Taylor as he spoke at the Friends Meeting House in Manchester on a tour promoting his book, yes you guessed it, on his bike.

The events of the summer of 2011 inspired Dan Jones to literally get on his bike, a second hand Railegh costing about £70, (probably nicked at some point in its history, says Dan), and spend four months touring the length and breath of the British Isles to find out what was really happening in the Kingdom.

Dan, from London, was tired of the metropolitan pontificating on what was happening in the rest of the country and decided to go and find himself in what his publisher refers to as Iain Sinclair meets Owen Jones, without a map or a plan, using social media to organize places to stay for free, when that failed making friends in pubs and when that failed pitching his tent wherever he could find.

During that tour he touched the North West, Preston to Bamber Bridge, Wigan, Salford and Manchester before heading into the leafy plains of Cheshire.

In Wigan he found  that “The chimneys and workhouses of the Leeds and Liverpool Canal are now gone, replaced with poundshops, pizza takeaways and homeware barns.”

In Manchester centre, he paused at The Printworks, “its ex-industrial interior refurbished as a mecca to the service
sector, with a cinema and countless aspirational chain eateries.” and in Salford Quays he finds out “just how effectively history’s been wiped away.”

Dan found an incoherent island, his island as the Brexit vote approached, is an island of retail parks, calls centres and derelict industrial estates, funded by the shadow welfare state thru tax credits.

He would pull over and ask people what life was like where they were, pillocking as they called it in Barnsley.

He found what he calls a broadly Northern Experience which began in the Midlands and lasted to the Scottish Borders, (The Scots he found were broadly optimistic) a pride in work, ” we used to make things here”, said a guy in Wolverhampton, “now it is a shithole.” People talked in the past tense, almost grieving about the past and having a pessimism about the present.

Collective belonging had vanished with the last remnants of industry in the 1980’s, he found a great deal of anger, pent up frustration, but what the 2015 election proved was that pessimism creatives conservatism, while the anger finally burst in this year’s Brexit vote.

The home is now the place of refuge, once it was the pubs and the working men’s clubs, now it is Netflix and chill as we battle against the realities of modern life, incomes that have not risen in real terms for eight years, while costs, particularly in housing, have risen. One of the consequences is the apparent rise in mental health issues as we manage this social upheaval.

The Centre of Manchester, in some respects, he found outside, it was after all the only place that voted to remain in Europe, while its satellite towns voted strongly to leave.Yet he realized that on stepping outside of the centre,

We are all middle class now according to John Prescott, ( in fact he never said it, telling the Guardian in 2012 that it came from a misquoted radio interview of 1996), there is no society anymore said Thatcher, we are a classless society said John Major. Well read the book and see if any of this is true.