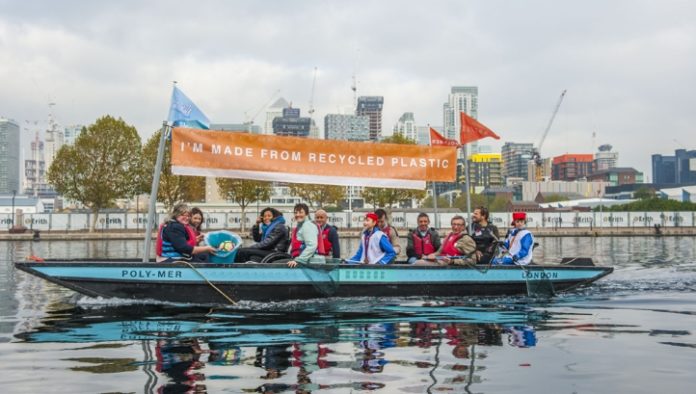 Today sees the maiden voyage of a new vessel in the battle to clean up Britain’s waterways.

The 12-seater punt made from 99% recycled plastic will be launched by the City Mayor of Salford, Paul Dennett, in Salford Quays.

From April to June the ‘Poly Roger’ boat will go on tour across the UK, taking people out on ‘plastic fishing’ trips to raise awareness of the growing levels of plastic pollution in our rivers and canals and to encourage more people to recycle their used plastic.  The boat has been built from plastic collected on previous plastic fishing trips, with plans to build a litter-busting fleet across the UK – a fantastic example of the circular economy in action.

The initiative has come from environmental charity Hubbub and has been built using funds collected from Starbucks’ 5p charge on drinks purchased in a paper cup across its 950 stores nationwide.

It’s only the third boat of its kind in the world and the first to launch outside of London. The craftsman tasked with building the boat was expert boat-builder Mark Edwards MBE, who also built the Queen’s barge ‘Gloriana’.  The design is based on a traditional punt, but it’s made from the most modern of materials – Plaswood, a hardwearing alternative to wood that is made entirely from recycled single-use plastic – and it’s powered by a rechargeable electric motor making it the most sustainable of boats.

The plastic fishing tour will see the boat used for a week in each of Birmingham, Bristol, Greater Manchester and across central Scotland.

In each location Hubbub is partnering with local organisations and volunteers, who nominated their area to take part in the Plastic Fishing Tour as part of a competition in partnership with the Daily Mirror to raise awareness on the issue of plastic pollution across UK waterways. One of the four areas will ultimately be chosen to keep the boat on a permanent basis.

Gavin Ellis, Co-founder and Director of Hubbub, said: “The pictures we’ve received from all over the country have shown how widespread the problem of plastic pollution is and it’s heartening to hear about the great work being done by volunteers battling to keep their local areas clean and safe for wildlife. We’ve seen the difference that plastic fishing has made in London, where we’ve taken 1,415 people out on trips and collected 162 kg from the London Docklands. We’re now looking forward to cleaning up more waterways across the UK. We hope the Plastic Fishing Tour will also remind people of the importance of recycling the plastic we use in our everyday lives.”

Jaz Rabadia, UK senior manager of energy and sustainability, Starbucks Europe Middle East and Africa, said: “As a business we are continually looking at ways in which we can help to shrink our environmental footprint – whether that’s in the way we operate or by helping our customers to make more sustainable choices.

“We know we have a responsibility to help protect the planet and that’s why we’re so pleased to be able to continue to support Hubbub, and initiatives including the Plastic Fishing Tour. We look forward to seeing what happens as the boat travels to each city and helps communities clean up their local waterways.”

Paul Dennett, City Mayor of Salford said: “Salford Quays is a beautiful area and while we make every effort to keep it clean, litter can accumulate in the docks after travelling in from nearby rivers, particularly after a heavy rain. The Plastic Fishing tour is a great initiative that will help to highlight the damaging effects of litter pollution in waterways across Greater Manchester and the rest of the UK and is a fantastic way of driving awareness of the issue. We’re calling on local residents to do their bit and help stem the flow of litter in the first place by disposing of their rubbish in a bin, taking their litter home if the bin is full and to recycle as much as possible. Keeping our streets, communities and waterways clean and tidy across Greater Manchester is all of our responsibilities, let us all rise to the challenge and keep our city-region clean!”