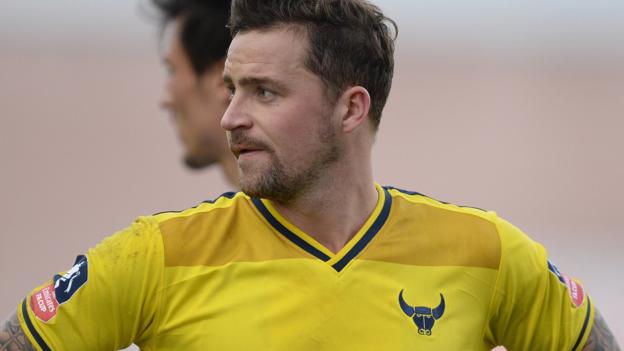 The 28-Year-Old striker  has signed a two-year deal with the Shakers after turning down the offer of a new contract from Oxford United, as well as offers from other clubs.

Maguire’s career started with Aberdeen in July 2005, with whom he would go on to make 158 appearances, scoring 24 goals. He moved South of the border in June 2011, joining Championship side Derby County after a fee of £400,000 was paid for his services, but after making just seven appearances joined Portsmouth on loan in January 2012.

He linked up with Sheffield Wednesday at the end of the 11/12 season signing a three-year deal with the Owls. A loan move to Coventry City came a year later before he joined Rotherham United in July 2015. After a year in Yorkshire, he moved South again, joining Michael Appleton’s Oxford United, where he made over 70 appearances – scoring 24 goals – before rejecting a new deal at the Kassam Stadium at the end of last season.

In total, Chris has made 380 appearances, scoring 76 goals. Chris was a regular for the Scottish U21 side for many seasons and was finally awarded two international caps for Scotland in February 2011.

“Chris is a player that I identified very early in the off-season as a player that I would want to recruit. The Chairman and I flew up to his home area in Aberdeen to have talks with the player about the possibility of him coming to Bury.

“He obviously had many offers to consider so we are delighted he has chosen us to come and play his football. Chris is a very technical player who has an impressive goal return backed by his 17 goals in 54 games last season for Oxford United.

“He can play many positions – as a second striker, a number 10 or in a wide area. Set plays are also an area of speciality for Chris. He will complement our other attacking players and I am very excited to be working with him.”