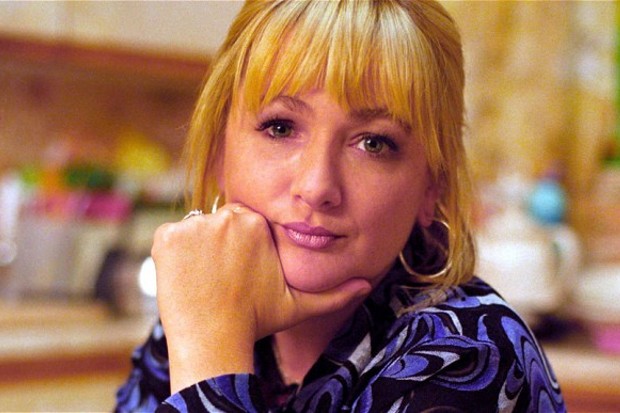 A specially-designed armchair that pays tribute to actor and writer Caroline Aherne is on display at the newly extended Macmillan Information and Support Centre at Wythenshawe Hospital.

The armchair was created by volunteers from the Macmillan Cancer Improvement Partnership (MCIP) programme and will be at the Centre until 29th August.

They wanted to make something that symbolised their involvement in helping to design and improve cancer services during the four year programme.

A silhouette of Caroline, in her Mrs Merton guise, features in the fabric alongside silhouettes of other volunteers.
Many volunteers came forward to join the programme after Caroline spoke at its launch at Manchester Town Hall in June 2014 while undergoing treatment for lung cancer. Caroline died in July 2016.

Her brother Patrick said: ‘Caroline would have loved this. She’d find it very funny that she’s featured on an armchair. It’s absolutely brilliant.

‘Caroline and our family got so much support from Macmillan and the staff at Wythenshawe Hospital. She wanted to give back and she wants us to do what we can to support Macmillan.’

Patients and carers from across Manchester, who were cared for and supported by The Christie, North Manchester General Hospital, Manchester Royal Infirmary, Royal Oldham Hospital, St Ann’s Hospice, Manchester Health and Care Commissioning, and Manchester. GPs, worked together with clinicians, commissioners and others to create a lasting legacy of improved cancer care services.