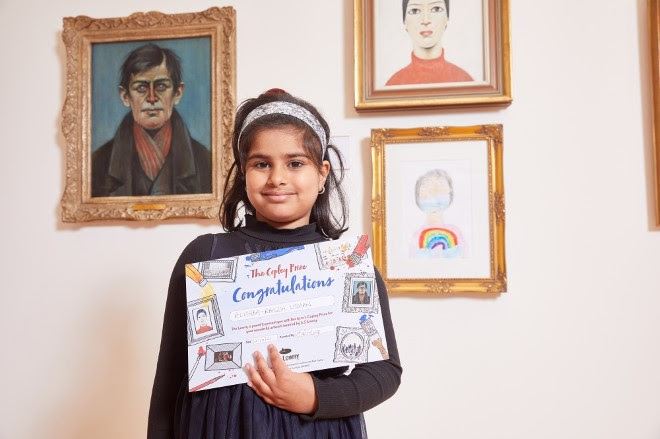 One of LS Lowry’s most famous portraits has been reimagined for the COVID-age by a seven-year-old artist from Salford.

Her work was selected as the winner of The Copley Prize, an annual competition for work by children inspired by LS Lowry.

Alishba was finally able to make a special visit to the gallery this week now that it has re-opened after lockdown for a private viewing of her work, which will hang alongside the original painting that inspired her for the next 12 months.

Commenting on the artwork, Michael Simpson, director of visual arts at The Lowry, said: “Alishba’s interpretation of Ann caught the judges’ eyes straight away. The addition of a face mask and the rainbow so closely associated with the NHS places this work very much in the COVID-era.

“Ann is an elusive figure that features in many of Lowry’s work. Whether she was a real person or just a figment of Lowry’s imagination, I think it’s pretty remarkable that she’s still inspiring artists like Alishba and making headlines years after Lowry’s death.”