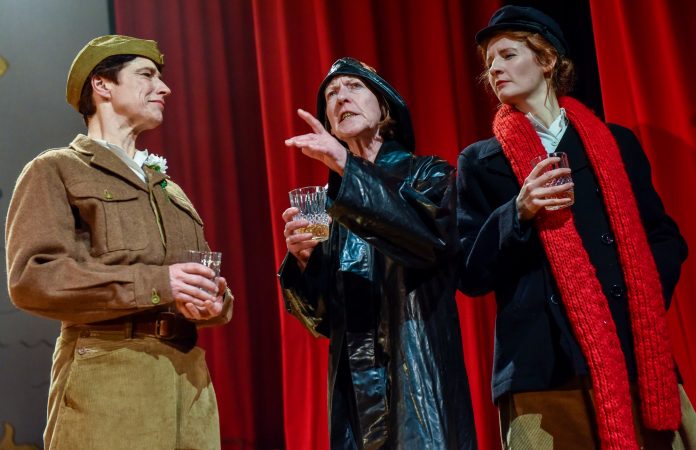 It’s 1943, the second World War has been fought for nearly four years, and while the islands of Great Todday and Little Todday off the coast of Scotland have seen little action, Cupid’s arrow has been working hard…..oh and the Islands have been out of whisky for twelve days.

But this is Compton Mackenzie’s novel Whisky Galore which was published in 1947 in a new light, a brand new, all-female adaptation courtesy of Philip Goulding.

The original took took creative inspiration from the sinking of the SS Politician in 1941, and Compton’s own time on the Isle of Barra in the Home Guard, the story adapted into an Ealing comedy film in 1949, becoming an instant success.

The female cast, and it works really well is intended in this centenary year of women’s suffrage, as a tribute to the feisty, fearless all-female touring companies of the post-war years, based on the true story of the Osiris Players, a troupe of female actors who toured the British Isles from 1927-63.

But it’s more than about whisky, as the news arrives half way through the play that 50,000 cases are shipwrecked close to the islands and the pompous  Paul Waggett of the Home Guard takes it upon himself to try and prevent the thirsty islanders from taking advantage of their good fortune while two weddings are being planned, one needing the Dutch courage to stand up to a disapproving mother, the other an English soldier returning from Africa wanting to marry the daughter of one of the protagonists of the illicit trade in Whisky.

The cast are brilliant, the interchangeability of characters, of the set and the subtle innuendo which keeps the audience amused with a special mention for Sally Armstrong and Coliseum favourite Isabel Ford.

Whisky Galore plays at the Oldham Coliseum until the 7th April