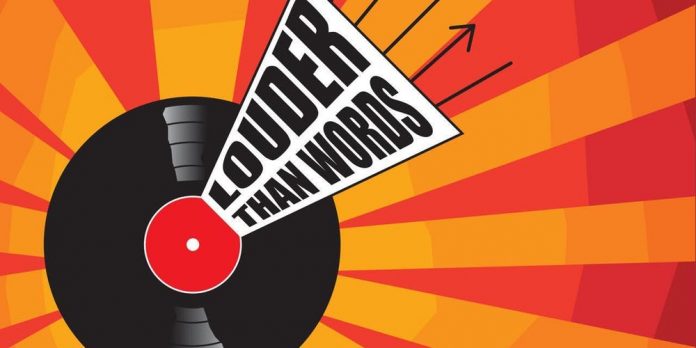 The Louder Than Words Festival of music and writing grows louder each year. Now in its sixth edition, this remains the only festival that interrogates that enduring love affair between music and the written word.

This Festival opens on the Friday with Radio 1’s Gemma Cairney, followed by the current bass player with Pink Floyd, Guy Pratt. As hilarious as he is sonorous, Guy will perform his one-man show The Inglorious Bassterd, with tales of working with everyone from Michael Jackson to Madonna (accompanied by one or two bass lines you may have heard before).

Moving into Saturday and you can take your pick from Zoë Howe talking about her Stevie Nicks biography, or Lucy O’Brien chairing a panel about Madonna as a gay icon. Elsewhere, Chris Difford talks about his life, including Squeeze, Kevin Cummins discusses his photographs of Morrissey, Geoff Travis talks Rough Trade, Jordan looks back on life as the original punk icon with Cathi Unsworth and Stuart Bailie is in conversation about his book Trouble Songs: The Story of music and Conflict in Northern Ireland since 1968.

Moving on to Sunday and we have Andy McCluskey overviewing his time with OMD, David Gedge from The Wedding Present is indeed present, Sheila Rock talks over her photography with Rudi Esch (Die Krupps), crime novelist Ian Rankin tracks his life through ten albums and Dave Haslam talks about his recent book Sonic Youth Slept on my Floor.

And that is merely to scratch the surface, as elsewhere numerous academics and music writers gather for panels, discussions, Q&As, workshops… and even a music quiz! As Festival Co-Director Jill Adam puts it… “come and indulge in what we feel is properly described as the UK’s biggest music literary festival.”

As well as hearing their stories, the Festival also offers a unique chance to get up close to people often only seen on the stage; in a much more social, conducive atmosphere of the suitably grand Principal Hotel. Built in 1895 as the Refuge Assurance Building, the Grade Two listed structure’s eclectic baroque style provides an elegant environment for an event of such diverse topics, with varied rooms used, including the wood-panelled Director’s Suite and the Post Room, for more social occasions and networking, as well as fringe events and book signings.

The hotel recently had a multi-million pound refurb, which includes the bar and restaurant ‘Refuge’, Festival hang-out for 2018, where you are likely to find these musicians, and indeed music writers, catching up and reminiscing.

Since its first incarnation in 2013, audience and contributor numbers have more than doubled, which in turn has only increased the variety of talks, panels and workshops programmed over the weekend.

Over those years the festival has welcomed music characters such as Rick Buckler (The Jam), Guy Garvey, Edwyn Collins, Viv Albertine, Mary Anne Hobbs, Woody Woodmansey (The Spiders From Mars), Wolgang Flur (Kraftwerk), Brix Smith (The Fall), Tim Burgess (The Charlatans), Miles Hunt (The Wonderstuff), Hugh Cornwell (The Stranglers), Alan McGee (Creation Records) as well as music writers such as Barney Hoskyns and Paul Morley to Manchester, talking all things musical and literary… as well as the spiritual godfather of the festival, Wilko Johnson.

Attendees come from as far as San Francisco and Moscow to engage in a weekend that includes panels, Q&As hosted by Louder’s John Robb (amongst others) and some very special performances from all four corners of the musical world: from club culture to heavy metal; ska to punk.

As well as looking back with most significant music personalities of past decades, Louder Than Words also celebrates future voices, with a continuing focus on the role of education in music and journalism, whether that be welcoming back the Slam Poetry workshop team; involving students as volunteers and panellists; arranging workshops on everything from writing and getting published, making music, DJing and music law. The Wilko Johnson Writing Award will make an extremely welcome return, celebrating young music writers under 25 and there is much to be enjoyed on the Festival fringe.

Tickets are available via http://louderthanwordsfest.com/tickets/ and are available as weekend passes, day passes, or event tickets, ranging from £6 for an event to £70.66 for a pass to the whole three-day weekend

Eleven unique ways to keep your kids entertained while indoors