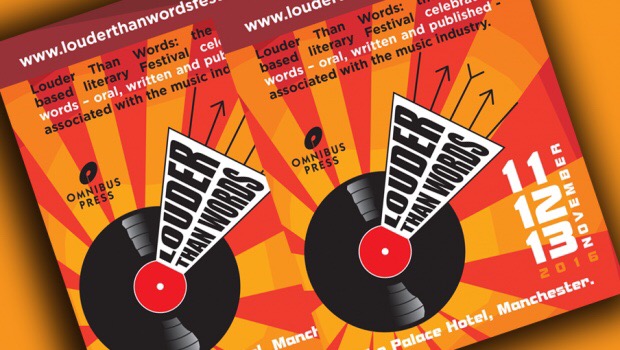 The Music/Literary Festival back for its fourth year!

Louder Than Words celebrates that essential, magical relationship between music and writing. Whether Guy Garvey talking lyrics; Edwyn Collins performing his own music or Hugh Cornwell talking about life in The Stranglers, the Festival has something for anyone with a love for music, and the way words are used to inform and contribute to its melody.

Taking in Q&As, panel discussions and workshops the Festival, now in its fourth year, is back at the gorgeous Palace Hotel, Manchester, which itself has benefited from a multi-million pound refurb since last year’s event. A beacon of popular culture, the Festival draws important music personalities to Manchester for one weekend, as well as an audience from as far afield as San Francisco and Moscow. The full weekend programme is now available from www.louderthanwordsfest.com and a few particular highlights are listed below:

The weekend kicks off with Brix Smith-Start, ex of The Fall, moving through a Punk@40 panel and Rebekka Kill’s fascinating ‘Facebook is like Disco, Punk is like Twitter’ performance, before Rebekka herself steps up to the decks to provide soundtrack to the launch party.

Saturday includes Woody Woodmansey (after the death of David Bowie the last surviving Spider from Mars); Q&As with Funky Si Wolstencroft, Kristin Hersh of The Throwing Muses and Eleanor McEvoy discussing her music and artistic collaboration with Chris Gollon.

Across the weekend journalists and authors such as Barney Hoskyns, Zoe Howe and Matthew Collin discuss their work; there are panels looking into everything from rock to rave; mod to grunge; Chris Jam brings Slam Poetry to Louder; and Un-convention explore the notion of ‘doing it together’. For those interested more in getting involved with the music business, there are also workshops, as well as The Wilko Johnson Writing Award for those under 25 who want to try their own hand at music journalism.

Across the board, then, there is something for everyone, whether aspiring music scribe or established music maker, with over 40 separate events over the weekend in four different rooms within the hotel (not forgetting the bar!)

Hear stories of rock & roll decadence and derring do… get books signed… get up close and personal with your musical heroes. Mark the November 11-13 weekend in your diary. It might get Loud…

Tickets: Tickets are available via http://louderthanwordsfest.com/tickets/ and are available as weekend passes, day passes, or event tickets, ranging from £3 for an event to £60 for a pass to the whole three-day weekend (£55 early bird )