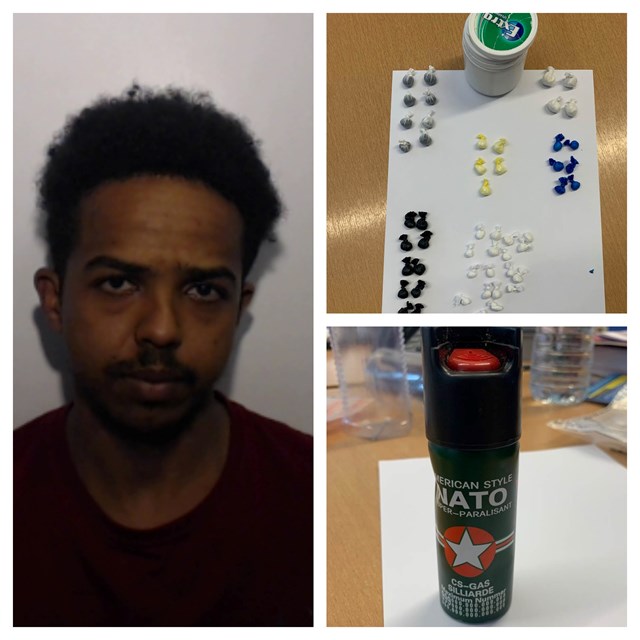 A London based drug dealer who was found to be hiding wraps of cocaine and heroin in a chewing gum pot when stopped in his car by police tackling organised crime in Salford has been jailed for over three years.

Nasir Omer aged 31 of Enfield, was sentenced at Manchester Crown Court to three-and-a-half years imprisonment after being found guilty of five offences including possession with intent to supply cocaine and heroin.

A jury also found him guilty of money laundering, possession of a section five firearm, and failure to comply and give his phone PIN when under arrest.

Omer came to the attention of the city’s anti-gang cops in June 2020 when seen parking a grey Ford Mondeo outside a store off Eastham Way in the Little Hulton area.

Officers detained him for a search of his car after spotting a metal rod in the back of the vehicle, and it was during this inspection that we located a chewing gum pot in the footwell that contained a number of wraps of class A drugs.

A CS canister was also recovered during the search and Omer was additionally found to not be insured and to not have a valid driving license.

He was arrested and taken to custody to be interviewed by Operation Naseby officers, while tests on the class A drugs found in the car came back positive for cocaine and heroin.

Omer repeatedly refused to allow officers access to evidence on his mobile phone – even when a court order was authorised in September that year – and he was subsequently charged with this offence, also.

In court, Omer was jailed for three years and six months relating to the possession with intent to supply class A drugs.

The term will be served concurrently with six month sentences respectively for money laundering, possession of a section five firearm, and failure to supply the PIN for his mobile (a section 49 breach contrary of section 53 of the Regulatory Investigative Powers Act).

The result is latest as part of Op Naseby’s disruption hub – which has been responsible for over 250 arrests, over 250 seizures of vehicles, and created over 400 intelligence logs helping to increasingly form a greater picture of criminality in the city since its inception in April 2020.

Three men arrested in Wigan under explosive act as police find chemicals in a...