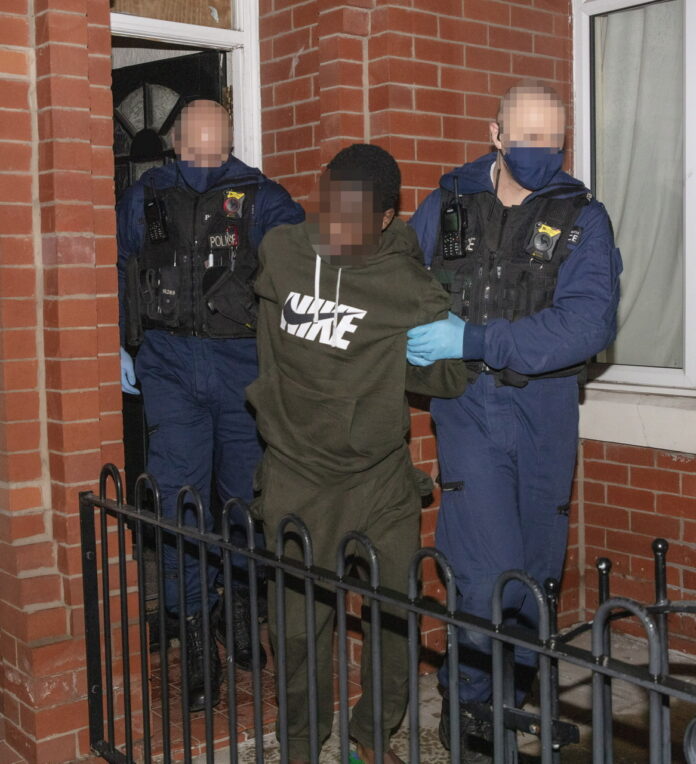 Six people have been arrested following raids this morning as part of a crackdown on criminal groups involved in serious crime in Rochdale.

Seven addresses in Moston, Ardwick, Newton Heath, Blackley, and Openshaw were targeted this morning by officers from GMP Rochdale with support from neighbouring districts and the Tactical Aid Unit (TAU).

Three men – aged 20, 18 and 18 – two 17-year-old boys and a 19-year-old woman were arrested on suspicion of attempted murder & conspiracy to commit murder. All six remain in custody for questioning.

A cross bow with ammunition, three machetes and a stab proof vest was recovered from one address. An amount of cannabis was recovered at another address following a successful search by GMP’s Tactical Dog Unit.

The action follows two serious assaults in Rochdale in December 2020 which detectives believe to be the result of a feud between two rival groups.

On 17 December, a teenager was stabbed on Tweedale Street, Rochdale, before he was taken to hospital with serious injuries. He was discharged three days later.

Over a week later on 28 December, officers were also called to a report of stabbing followed by a road traffic collision on the same street.

A 21 year old man was hospitalised after sustaining lacerations to his arm & torso and also a broken arm. He was released two days later.

Enquiries are ongoing, and anyone with information is encouraged to contact police or Crimestoppers.

Detective Inspector Karl Ward, of GMP’s Rochdale Challenger team, said: “This morning’s raids are the result of an extensive amount of investigative work following a concerning trend of serious assaults recently, particularly around the Freehold area of the town.

“It concerns me greatly to see young people involved in assaults where bladed weapons have been used to commit violent attacks. It is absolutely vital that we do all we can to remove this threat and to take such dangerous items off our streets.

“It is important that people feel safe in their communities, and we have done an enormous amount of work with our local authority partners to reduce the risk to young people living in the Freehold area.

“These arrests represent a positive step in sending that reassurance message. Knife crime will not be tolerated, and we will continue to work tirelessly to bring those who choose to engage in such activities to justice.

“While we have arrested six people today, I would encourage the public to continue to report incidents of concern so that we can take appropriate action with the assistance of our partner agencies.”

Police want to speak to this person after attempted robbery of 12 year old...