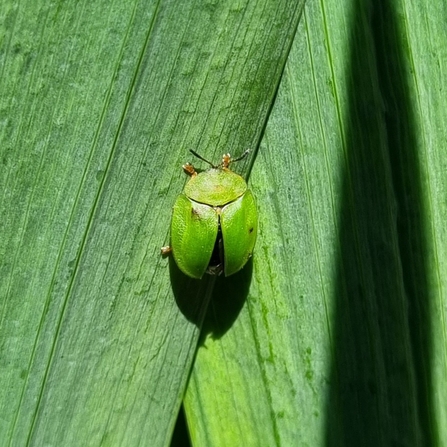 Records suggest that this is the first time this insect has been recorded in North Manchester. It also demonstrates the positive effects of habitat creation in urban parks.

The beetle was found on the floating islands in Boggart Hole Clough alongside one of its favourite plant species – water mint. Volunteers found the beetle during a wildlife walk and uploaded it to the iNaturalist app for identification.
Russell Hedley is the My Wild City Project Officer for the North Manchester Nature Network:

“This is a great example of co-operation leading to more wildlife in the city. The council organised floating islands on Boggart Hole Clough adding a new habitat and new native plants to the lake. These plants attracted brand new species to the park such as the tortoise beetle.

Volunteers then took part in citizen science to discover the beetle and identified it through iNaturalist. This new record shows the positive results of years of work to improve Manchester’s wildlife. It is a great example that taking action can deliver real results for local animals and plants.”

These events were the first of the year at Broadhurst and successfully tracked down two species of bat and one species of newt that had not been recorded on the site before. The common pipistrelle is often found in parks and gardens whereas the Daubenton’s bat focusses on ponds and wetlands.

Smooth newts (Lissotriton vulgaris) were also seen in the torch light and recorded in the park for the first time.

Bats are one of the species the My Wild City team are looking to help by creating a Nature Recovery Network map for the city. This map will identify priority habitats and possible wildlife corridors.

The North Manchester Nature Network project is encouraging anyone who would like to get involved to start recording wildlife using iNaturalist. This is a website and mobile app where you can upload pictures of animals and plants to be identified by other website users. The more people using iNaturalist, the more species could be discovered living in North Manchester.

The North Manchester Nature Network project is funded by the Cadent Foundation.

“The North Manchester Nature Network project is a fantastic initiative and we’re delighted to see the impact it is already having in helping to improve biodiversity and reverse the decline of nature. It’s exciting to see these new species identified locally. Creating a wildlife rich environment is not only good for the planet it also has huge benefits for people’s mental and physical wellbeing.”