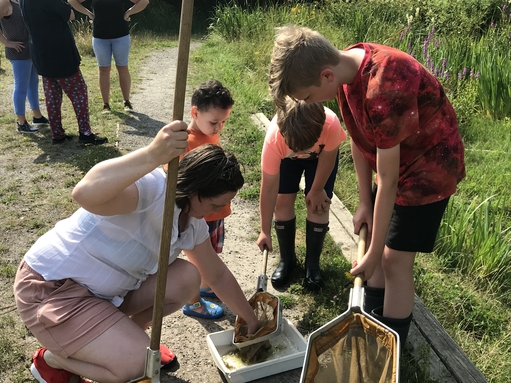 The My Wild City team have led families on several bug hunting events in North Manchester, which has discovered new wildlife species for the city.

How did you spend your summer? This year, local children living in North  Manchester spent their summer recording brand new species and enjoying the wildlife on their doorstep.

The Wildlife Trust for Lancashire, Manchester and North Merseyside has been working with local organisations including Manchester City Council to deliver bug hunts and pond dips in several North Manchester parks and green spaces.

As the children built new bug-hotel homes and searched for ladybirds, ants and centipedes, the My Wild City team helped identify and record their discoveries.

Their sightings add several new animals to a growing list of wild species that we know live in the green spaces of the city.

Among the new findings was Britain’s longest species of centipede the Western Yellow Centipede, the 2-Spot Ladybird and the Nursery Web Spider, who wins ‘mum of the year’ for carrying her eggs everywhere she goes in her mouth.

Project Officer Russell Hedley is thrilled with the results:

“This summer has been brilliant for protecting wildlife alongside running fun family events. The enthusiasm the children have for finding these little creatures has helped us discover brand new species in Boggart Hole Clough, Broadhurst Clough and the surrounding areas. We cannot protect what we don’t know is here, so these records are vital in helping us shelter Manchester’s wildlife”.

Investing in nature is key to levelling up rural regions in the UK says...