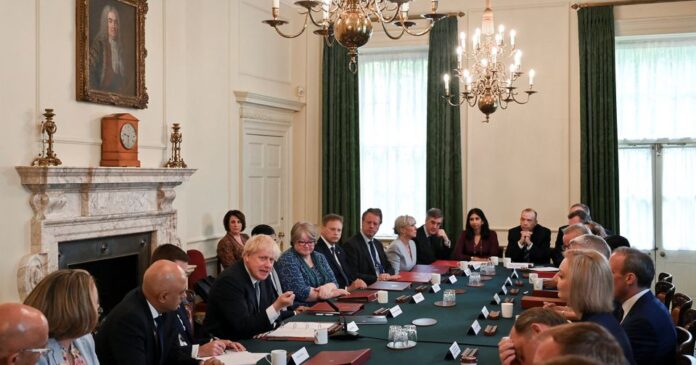 It has been reported this morning that the 1922 Conservative Back Bench Committee now favours sending a “delegation” of MPs to Boris Johnson to tell the PM that it is time for him to resign.

The news come from James Forsyth, the political editor of The Spectator, who says  that he has been told that by a senior figure on the 1922 Committee

Reports als say that the Committee is drawing up contingency plans for leadership hustings to start as soon as Monday. This would they say allow time to complete run-off before recess, with Tory members voting on the final two in August. However it would require the Prime Minister to resign this week.

Chris Skidmore, the former universities minister, has written an open letter to Sir Graham Brady, chair of the Conservative 1922 Committee, saying he no longer has confidence in Boris Johnson as Tory leader.

There has been five more resignations this morning, the latest in the last few minutes being the economic secretary to the Treasury John Glen who said that he had a  “complete lack of confidence” in Boris Johnson’s leadership.

16 Tory MPs have now resigned from Boris Johnson’s cabinet in less than 24 hours.

Felicity Buchan, the Tory MP for Kensington, has resigned from her role as parliamentary private secretary to the Secretary of State for Business, Energy and Industrial Strategy.In a letter posted on Twitter, she said “the current situation is untenable”.

Laura Trott has resigned as a PPS to the Department of Transport, saying “Trust in politics is and must always be of the utmost importance but sadly in recent months this has been lost”.

With great sadness and regret, I have this morning tendered my resignation to the Prime Minister after I accepted and repeated assurances on Monday to the media which have now been found to be inaccurate.

Victoria Atkins has resigned as a Home Office minister, saying “integrity, decency, respect and professionalism” should matter.In her letter she said: “I can no longer pirouette around our fractured values. We can and must be better than this.”

Robert Halfon, the Tory chairman of the Education Select Committee, has published a statement on Twitter saying he has lost confidence in Boris Johnson. He said “not only has there been a real loss of integrity, but a failure of policy” with Mr Johnson in No 10.

Sir Roger Gale, a veteran Tory MP and a long-standing critic of Boris Johnson, said the Prime Minister needs to leave No 10 “one way or the other”.

Sir Roger said Mr Johnson has a “great instinct for self-preservation, the unfortunate thing is it is about him, not about the country, not even about the Conservative Party, it is all about Mr Johnson and his desire to survive”.

Last night Boris Johnson signalled that he is staying out in Downing Street despite the resignations of his Chancellor, Health Secretary and ten junior ministers

“For the next stage, we need a plan for growth and not just balancing the books”

“Nor is the prime minister’s dishonesty limited to questions of personal conduct. Mr Sunak, in his resignation letter, focused on Mr Johnson’s reluctance to tell the public hard truths about the state of the economy and level with people about the tough choices that lay ahead. As Mr Johnson’s political difficulties have intensified, so he resorts to ever more fantastical policy announcements that do not survive contact with reality. That only further undermines public confidence. This is no way to run a government. If Mr Johnson will not quit, the 1922 Committee should make clear that it will move swiftly to change the party rules to facilitate a new confidence vote. There is still time, if it moves fast, for the Conservative Party under honest, respected, responsible leadership to recover its reputation and win the next general election. Under Mr Johnson, there is no chance.”

“It’s a bit like the death of Rasputin. He’s been poisoned, stabbed, he’s been shot, his body’s been dumped in the freezing river and still he lives.”