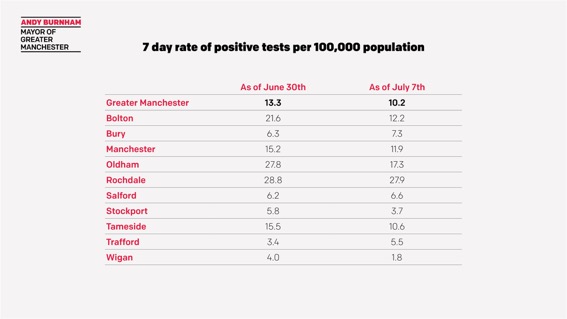 The number of cases of Covid-19 across Greater Manchester have fallen in the last seven days.

Figures released this afternoon showed that the seven day rate of positive tests had fallen from 13.3 to 10.20

Figures showed that in Oldham and Bolton, two places with the higher levels last week, have seen substantial falls although the highest,Rochdale with 27.9 had seen little change.( Leicester by comparison has a rate over 100)

“They have been working throughout lockdown and unable to self-isolate if symptomatic or asked to do so by NHS Test and Trace because they know they won’t be paid if they do.“

“Scandalously, this includes people working in social care. At the start of the crisis, Unison surveyed care workers in the North West and found that 80% feared they wouldn’t be paid if they needed to self-isolate.

Ahead of the Chancellor’s mini budget he added

“Until we get much more serious about the improving the quality of jobs, we won’t build back better or stronger.”

Andy has called on Government to invest in improving the world of work to “level up our poorest communities and regions.”

Thinking of you all today says Ariana