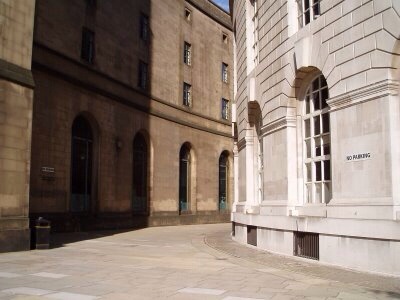 The fight to save Library walk at Manchester’s Central Library continues unabated.

About Manchester has received news from the Manchester Modernists that a Stopping Up Order has been issued to close Library Walk and that if a number of objections are received then an inquiry must be launched by The Secretary of State for the Environment, Food and Rural Affairs.

The group says that this is an opportunity to review the whole scheme and their experienced legal team are confident that they have a very strong case to present at inquiry.

The iconic walk, pictured and painted on numerous occasions has become a victim of the redevelopment at the Library and across St Peter’s square.Now the group are asking the public to help their campaign by writing a letter to oppose the Stopping Up Order so that they can halt work and trigger an inquiry. The deadline is tight, with the public having until just February 28th to act.

The battle to save Library walk, designed by the celebrated architect E Vincent Harris to complement Central library and the Town Hall Extension in the 1930’s has been up going since 2012. Campaigners claim that due to its curving path, and the ravine-like effect of the two tall 20th century buildings on either side, with their complementary styles of architecture, it must be one of the most interesting passageways in any British city.

Stop the closure of walk in centres Burnham tells PM