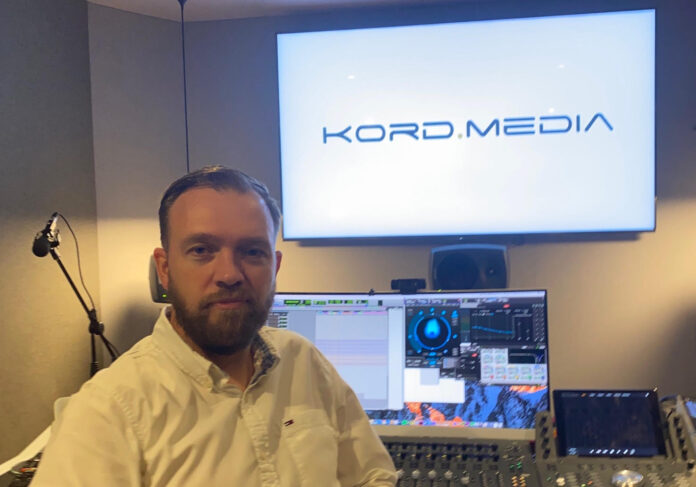 A Manchester audio post-production studio has celebrated its one-year anniversary since it launched at Bonded Warehouse last year.

KORD.Media was set up by Daniel Piggott, who has more than 15 year’s experience working in the audio post-production industry in Manchester. In 2019, he launched the KORD.Media studio to provide a full range of high-end audio post-production services, not only for the established television industry in Manchester but across the UK, Europe and the US.

“I could see a gap in the market for a highly specialised studio that is adaptable, flexible and hugely responsive. As a small business, we are able to tailor our service to fit within existing business models or offer concepts that suit those who are changing the way they work.

The media and television industry has changed enormously in recent years, and our studio is there to provide companies with the specialist audio services they need. As a small business that puts as much energy into communication as we do creative sound design, we adapt to each project and client, working with them as an extra team member, bringing in our expertise. Having started my career at the renowned post-production facility Sumners, I look back and realise how lucky I was to receive a level of industry training that very quickly has become hard to achieve.”

Department – Bonded Warehouse is a historic 1800s storage warehouse, once a railway terminus linking Manchester and Liverpool. The warehouse later formed part of Granada Studios’ estate. Now, sitting beside Manchester Studios, the space has been reinvented as a thriving community for creative entrepreneurs, media businesses and tech start-ups.

KORD.Media has delivered full audio post-production on projects for companies such as Title Role and Workerbee, and brands such as Castrol, Center Parcs, and AstraZeneca, with Disney+ recently added to their list of clients.

“Although we had planned a big first year birthday party, COVID-19 means that obviously such a celebration is impossible, but we will definitely make up for that when we can. It’s been an amazing first year despite all that has happened in recent months, and we’re looking forward to growing and developing as a business.”

Mind the equity gap-Researchers find Companies in the South receive three quarters of all...

Manchester Gin – to Canada, and Beyond

Giving ex offenders a chance-IoD North West event at The Clink restaurant within the...