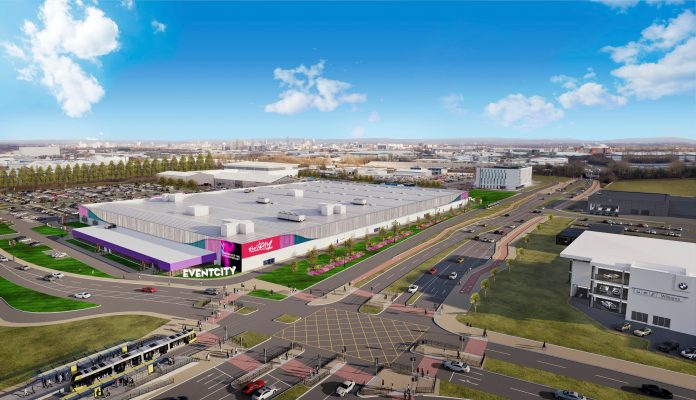 EventCity has today revealed its vision for the future and what its surroundings will look like following major transport and infrastructure upgrades.

Located in TraffordCity, six miles from Manchester city centre, the venue has reported a 60 per cent increase in revenue and has seen new clients confirm business from the exhibition, sports and conference sectors, with notable business from global restaurateurs and national financial organisations.

One key element of the area’s enhancement that has played an important role in attracting the new enquiries, is the £350million Trafford Park Metrolink line, which is currently underway and due to arrive at the venue’s doorstep in 2020.

EventCity benefits from the area’s strong 1,000 hotel bedroom offering and its 2,000 free onsite parking spaces, with a further 1,000 scheduled, enhanced further by the Metrolink, which will play a pivotal role in connecting delegates to Greater Manchester and Manchester International Airport.

Simon Jones, Sales Director, EventCity, said: “The arrival of the Metrolink is a huge asset to EventCity. As the completion date approaches, we are seeing more clients enquiring about our conference and exhibition services. The line will connect us to thousands of hotel beds, the international airport and, of course, Manchester City centre.

Jones continued: “It is an exciting time for EventCity as its success grows with the area, while it sees major and ongoing investment over the next five years. We recognise and appreciate the enhanced access brought by the Metrolink and we are looking forward to welcoming both our returning and new customers to experience the venue and its fantastic location.”

This year, TraffordCity has attracted major businesses to the area, including Williams Group that unveiled last month plans for a £41m flagship retail centre for BMW, MINI, Land Rover and Jaguar across from EventCity, bringing a prestigious motor offering to Peel Land and Property’s evolving TraffordCity development.

Award-winning nursery group Kids Allowed, set to open in September 2018, will be a new £1.5 million purpose-built nursery and one of the most environmentally friendly buildings in TraffordCity’s portfolio to date. The building will feature Manchester’s first Urbanscape innovative green roof system, which will improve the energy efficiency of the building and enhance local air quality by removing carbon, particulates and heavy metals from the atmosphere.

Over the next 20 years, £3billion will be invested in TraffordCity by The Peel Group, investors, stakeholders and partners, boosting the local economy and supporting the community through generating new job opportunities.

Made for Manufacturing programme offers SMEs the chance to kickstart 2021