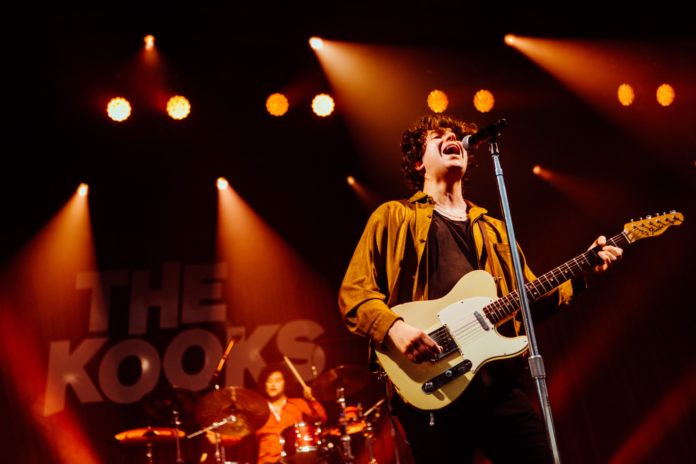 The Kooks returned to conquer Manchester on a warm summer’s Friday night under the stars. Joni, of Manchester music blog The Journalix, was there to sing loudly and proudly…

Castlefield Bowl is such a top Manchester music venue. Perfect location and size, and the sound is always great. It has played host to a variety of music genres this year with (one of our favourite events Sounds of the City) from Kylie to The National, Hacienda Classical to… The Kooks.

With support from rising stars Sea Girls playing their 100th show tonight, then The Sherlocks, the crowd is in a great mood. Despite not yet releasing their debut album, The Sherlocks brought many fans here – they’ve brought flares as well as all the cheers!

Then it is time for the headliners enter the fray, with a cool breeze drifting down the canal (!) the crowd are warmed up and ready to sing their hearts out. Everybody looks happy tonight and with the aptly named “Always Where I Need To Be” the party really starts. Everybody jumps and dances along with The Kooks’ frontman Luke Pritchard knowing exactly how to bring the energy.

A very accomplished live band, The Kooks are sounding as good as ever. With 5 studio albums under their belt they have plenty of tunes to choose from. And they choose wisely! The hits just keep on coming. Quite possibly their biggest pop song “She Moves In Her Own Way” gets massive cheers and “Ooh La”, also from their 2006 debut album, encourages a great big singalong.

It’s obvious the band are enjoying it too with plenty of smiles coming from the stage and frontman Luke Pritchard declaring the crowd to be full of beautiful people. Well, of course, we are!

With the crowd full of younger new gig goers, and their parents, older couples and groups of friends, the night continues to be nothing but joyous. “Be Who You Want To Be” is very well received. The neighbours might as well join in to “Bad Habit” cos if they thought they were having an early night there’s no choice with the crowd in full voice tonight!

Nestled in the heart of Castlefield, its always traditional to give a wave to the passing train on the bridge, and we do so again tonight. Everyone in the crowd also gives a quick glance to the jammy gets on the surrounding balconies , jealous at how lucky they are to have such a great free view for the best summer city gigs!

But tonight everyone is genuinely happy to be here and the crowd sway as one, as the mood changes for “See Me Now” and “Seaside”. Pritchard encouraging phone torches and people on shoulders so the look of the crowd changes too and we’re all loving it. We sound pretty good too, all joining in to form one impressive Manc-accented choir.

“Shine On” is a personal favourite and goes down really well. “Do You Wanna” sounds brilliant with the drummer really working hard and on top form this evening.

With a two song encore The Kooks finish with “No Pressure” – finishing with indie disco mega hit “Naive”. Of course, this is much loved and we all love it much tonight.

Time for us to all filter out, very happy under the warm Manchester sky. Our summer continues, and this year the live music is providing us with a truly wonderful soundtrack.