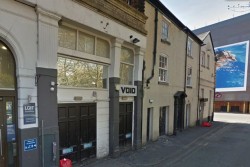 A woman was assaulted at around 3.30am on Saturday by a man on Richmond Street causing the woman an eye injury that required hospital treatment.

The offender is described as a white man, aged in his late 20s to early 30s. He had dark hair and was between 5ft 8ins and 5ft 10ins tall. He was wearing a black polo top with white writing on the front and dark jeans.

He was in the company of two other men. One of the men is described as similar to the offender in appearance, only slightly thinner.

The third man was slightly taller than the other two and was wearing dark blue jeans and a long-sleeved pink top.

No further descriptions are currently available.

Chief Inspector Cherie Buttle of GMP’s City Centre Division said: “This was a violent and unprovoked attack upon a young woman who was simply minding her own business during a night out.

“We are determined to find those responsible for this cowardly assault and would appeal to anyone who has information to come forward as soon as possible.

Jailed for “cowardly and foolish attack in Rochdale