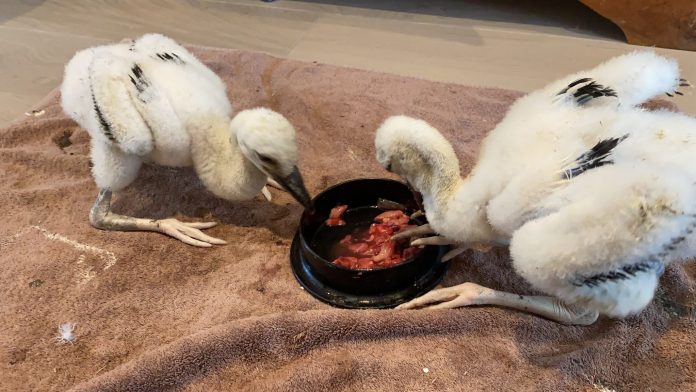 Hot on the tail feathers of the first wild stork chicks to hatch in the UK in 600 years, Knowsley Safari delivers the news that five more storks have joined its ever-expanding wading brood.

The five chicks are the offsprig of two diffent sets of parents at Knowsley Safari, which cares for and breeds birds in partnership with ornithology experts Gauntlet Birds of Prey. Couple Mr & Mrs Red welcomed one new arrival while Turbo and Diesel are parents to four baby storks.

Having hatched at different times, the chicks range in age from two and a half to just over three weeks old. Each chick took 24 hours to emerge from its shell and weighed around 100g/3.5oz – about the same weight as a new born kitten.

The chicks have daily weigh-ins before and after their feeds, which helps monitor the species’ extreme growth process – on average, each feathered friend gains a staggering 3.5oz in weight per day.  Feasting on a diet of chicken, mice, quail and fish like sprat, each stork will weigh approximately 6-7.5 lbs and measure 100-115 cm high when fully matured – as high as an average five year-old child!

Gauntlet Birds of Prey works in partnership with Knowsley Safari to care for its extensive array of bird species.  Graham Bessant, owner and founder of Gauntlet said: “Storks are a fascinating species of wading bird that make very interesting parents.  Despite their well-known association for delivering babies safely into loving families, they’re often neglectful in the raising of their young, who end-up needing an incredible amount of support to thrive.  If they surivive the 32 day gestational period, they have to ensure they get sufficient food for their long limbs to develop and to satisfy their expedential growth rate.  Unfortunately, stork parents can sometimes be rather selfish with their food!

“We’re currently caring for them until they can safely fend for themselves, at which point they will settle into their home at Knowsley Safari in the company of their 14-strong white stork family.  During these uncertain times of coronavirus and the lockdown, it has been a delight to see these remarkable birds continue to recover from centuries of hunting and a loss of habitat, and breed successsfuly both in the wild and within Knowsley Safari’s incredible environment.”