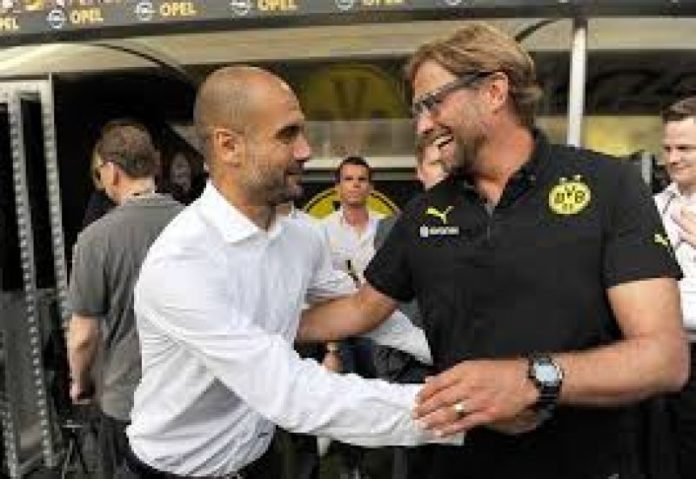 MANCHESTER City and Liverpool are not only matching each other win for win but their gaffers are playing a psychological blinder, according to sport psychology lecturer and consultant Dr Andrew Evans.

Jurgen Klopp and Pep Guardiola’s use of psychology is crucial for helping maximise the positivity around both camps with just six points left up for grabs, says the University of Salford academic.

“Managers who are faced with adversity can sometimes put too much pressure on players through the language they use, conveying messages to their players that victory is an absolute must and failure would be terrible and unbearable.”

“Psychologically, it is best for managers to avoid using what we call ‘irrational language’ where winning or losing is all or nothing, losing the title would be ‘catastrophic’, and the club and players would be ‘failures’ because of not winning the title,”  he says.

Dr Evans, who recently published research on the effectiveness of half-time team talks in football, adds: “From our research, we have found evidence that communicating irrational language to athletes instigates a threat response and a focus on avoidance. We have also recently found that communicating  irrational language results in lower levels of self-belief and worsened performance in athletes.”

“It is fascinating, he says, that both managers are instead using what we call ‘rational language’ when talking about approaching the title run in.”

“In one camp, Guardiola speaks frequently about making progress irrespective of winning or losing the title, that City ‘have already moved on to the next level from last season’, and that he is happy with their performances. This language reflects that belief that winning or losing  a title does not mean that athletes should be rateable on the basis on one outcome.”

“In the other camp, Klopp talks regularly about wanting to win games with no histrionics about the price of failure. His language is logical, pragmatic, and non-extreme, saying such things (as before the Huddersfield match): ‘If we win it, we win it. If we don’t there are no regrets  as long as we give our best.’”

“Ultimately, both managers are cleverly considering the language they communicate that will help to take the pressure off their players as we approach a pivotal stage of the season.”