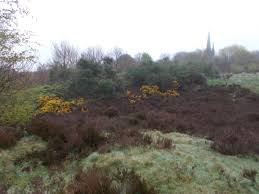 At the end of the last Ice Age, drifting glaciers melted and left behind two hundred feet of sand and gravel leaving what would become undulating scrub land raised high over the rest of Manchester.

Kersal Moor has seen many activities over the centuries.Demonstrations and meetings during the Civil War and the Industrial Revolution, duels fought, gallows erected, militia camped there and three hundred thousand would hear the Chartist Cause being preached and Horse Racing.

However once the racing course had been moved down the valley to Castle Irwell and the Chartists had gone, the botanists came.Two in particular,Richard Buxton and John Horsefield would meet on the moor.

Buxton, a self taught man, a maker of children’s small leather shoes in the grimy streets of Ancoats, and Horsefield, a leading artisan naturalist of the district who lived at Besses o’ th’ Barn, a handloom weaver who pinned the Linnaean classification of plants to his loom so that he could learn them off by heart.

The two, it is said met by chance on the Moor and for Buxton, the meeting would become a turning point in his career.

He would publish ‘A Botanical Guide To The Flowering Plants, Ferns, Mosses, And Algae, Found Indigenous Within Sixteen Miles Of Manchester; With Some Information As To Their Agricultural, Medicinal, And Other Uses’ many familiar to people who walked upon Kersal Moor.  Some named are now extinct, some not named because they grew everywhere.

Although Buxton compiled two floras, he remained poor, living in a room in his sister’s house in Gun Street, Ancoats. He died on 2nd January 1865 and is buried at St. Mary the Virgin’s churchyard in Prestwich. Most of his collection is housed in the Botany School of the University of Oxford.

Another botanist would also been seen on Kersal Moor.

Robert Cribb would find a number of unknown moths on a rotten tree on the Moor and later they were given the name Shiffer-muellaria Woodelia.  He would leave the specimens in a box with a local publican whom he owed a lot of money as a surety, only to find that the box had been thrown on the fire, thought to contain only rubbish.

Only three specimens survive, one which is at the Manchester museum.

The moth has never been seen alive since and it is believed that the caterpillars may have originated in India or the United States transported to the region via a local cotton mill.