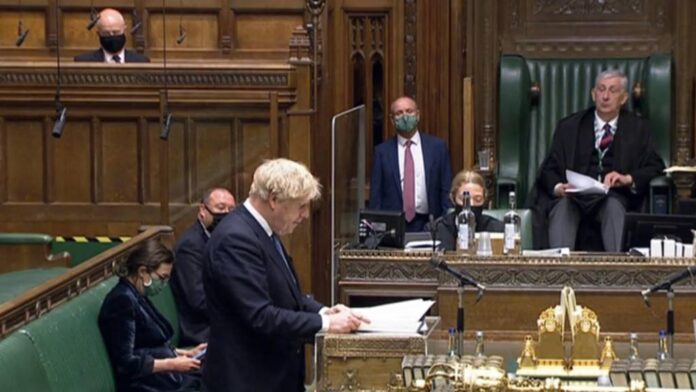 Boris Johnson has announced an inquiry next year into the handling of the COVID-19 pandemic that is likely to focus on why the United Kingdom suffered Europe’s worst death toll and was so slow initially to impose a lockdown.

Speaking in the House oF Commons, the Prime Minister also said that he is setting up a commission on Covid commemoration.

Justifying the delay he said that no public inquiry would be fast enough to help in dealing with the pandemic this year.The inquiry, instead, will look at the events “in the cold light of day”, and make recommendations for the future.

An independent statutory inquiry, set up under the Inquiries Act 2005, will be set up. It will have the power to compel the production of evidence, and will take evidence from people in public under oath.

Johnson added the process will place the state’s actions under the microscope and we should be mindful of the scale of that undertaking and the resources required to do it properly.

“Should prove highly transmissible and elude the protection of our vaccines, they would have the potential to cause even greater suffering than we endured in January. There is in any case a high likelihood of a surge this winter when the weather assists the transmission of all respiratory diseases and when the pressure on our NHS is most acute.”

Labour leader Sir Kier Starmer welcomed the announcement of the commission on Covid commemoration but asks why the inquiry can’t start later this year and added that the choice of chair for the inquiry is crucial.It should be someone who has full support of everybody.

Sir Ed Davey, the Lib Dem leader said in a statement that “From the failed test, trace and isolate system to the crisis in our care homes Boris Johnson and his government have no end of questions to answer so I welcome this inquiry in spite of it being 13 months after the Liberal Democrats first called for it.

Student who has stammered from childhood, achieves his dream