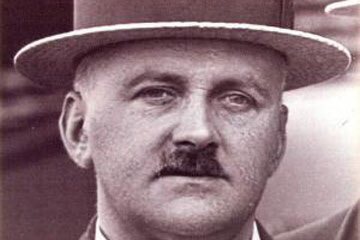 He was, at least so far, the only person to manage both Manchester United and Manchester City and was born this week in 1866.

James Ernest Mangnall was born in Belmont, Bolton on the 4th January 1866, the son of Joseph Mangnall and Anne.

He went to school at Bolton Grammar School where he played inside right for the school football team and then for the Old Boys.

He was also a keen cyclist, and in his youth he cycled from Land’s End to John O’Groats and also played goal keeper for Lancashire County football team.

A keen supporter of Bolton Wanderers, he became their director and then secretary, later becoming the secretary at Burnley in 1899, where he was appreciated for his skills in spotting talented players.

He became the Manager of Manchester United in 1903, then still a struggling team, having moved from Clayton the previous year and changing their name from Newton Heath.

They began in the second division it were promoted after two seasons and in the nine years, he was in charge he would transform the club, winning two League titles and the FA Cup and overseeing the building of their new ground at Old Trafford.

Whilst there, he built a modern club, developing a scouting network and placing great emphasis on physical fitness and was motivation.

Mangnall was the first at Manchester United to have complete control of the team, he was the first to understand and use the media, and the first to take the club into Europe during a post-season tour after winning the League in 1908.

The story goes that in 1912 he fell out with the owners, the cause, familiar to modern football, was that he thought the playing staff needed rebuilding but there were no funds available.

He resigned and joined Manchester City, then playing at Hyde Road and would stay with the club through the difficult years of the First World War and would be, as he did with United, instrumental in moving to the Club to a new ground, Maine Road in 1923.

That would be his last season in charge culminating in the club reaching the FA Cup final, although losing to Newcastle.

Sir Bobby Charlton to be honoured at Old Trafford

Kaufman under fire from his leader over Jewish comments