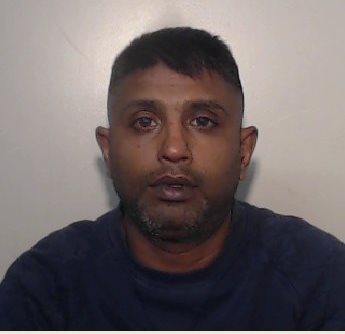 Samaun Shah aged of Hornby Road, Stretford was sentenced at Bolton Crown Court to eight years in prison after being found guilty of rape.

The woman asked him for a cigarette to which he obliged before insisting that she walk with him to Old Trafford Metrolink Station.

The pair walked together along Warwick Road when Shah crossed the road and beckoned the woman into the car park at Warwick House.

When she refused, he dragged her into the car park and raped her.

After being arrested Shah denied his involvement, stating he had been in bed at the time the rape happened.

He continued to deny being there even when shown CCTV footage of him and the woman walking on Chester Road and Warwick Road.

Detective Constable Paul Walls, of GMP’s Trafford borough said: “Samaun Shah is a depraved sexual predator who preyed on a vulnerable woman who had merely asked him if she could have a cigarette.

“He took her to a spot where he thought nobody would see him and subjected her to a terrifying rape, the memory of which will stay with her for the rest of her life.

“Even when shown CCTV footage during interview and throughout his trial, he continued to deny his involvement which highlights the arrogance of a man who thought he could get away with his despicable crime.

“Although this sentence won’t change what happened, I hope it will bring his victim some comfort to know that, as a result of her bravery in coming forward, a dangerous has been taken off the streets.”