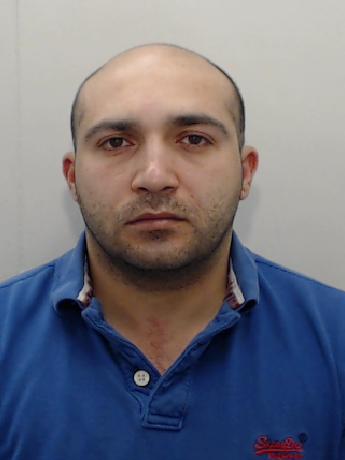 Vincenzo Tavano aged 33 of Park Lane, Poynton, Cheshire, been jailed for life, with a minimum term of 17 years, for murder at Manchester Crown Square Court after pleading guilty at an earlier hearing to the murder of Giorgio Roncari.

Police found the body of the sixty one year old in a house on Blackburn Street, Trinity in April.

Officers launched a murder investigation and discovered that Giorgio’s Jaguar car was missing.

Around the same time, credit cards belonging to Giorgio were used in online purchases, some of which were collected in stores in Manchester. The purchases were collected by Tavano who was then tracked by CCTV to another store where a further transaction took place using Giorgio’s bank card.

Tavano was arrested on suspicion of Giorgio’s murder and despite answering no comment questions in police interview, he then fully admitted his involvement.

The court heard that he had gone to Giorgio’s flat on Saturday 15 April 2017 but when Giorgio confronted him about the debt he owed him, Tavano grabbed him by the throat and choked him.

He claimed to have put a plastic bag on his head to see whether he was still breathing before taking his wallet, cards and keys to his car.

A Home Office Post-Mortem examination established the cause of death was strangulation.

“The immoral and opportunist behaviour he displayed after he murdered a man proves there is no place better for him than behind bars.

“Giorgio was a well-liked and popular man in Salford and will be terribly missed.

“My thoughts remain with his family and friends at this time.”