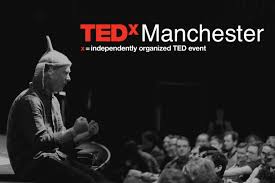 Greater Manchester’s Mayor Andy Burnham will be one of the speakers at this year’s TedX talk at the Bridgewater Hall this Sunday.

He will be joined by among others Dan Hett the BAFTA-winning artist and creative technologist who came to global prominence when his brother, Martyn was identified as one of the 22 killed in the Manchester Arena terrorist bombing. Since then, Dan and his family have embraced support from around the world but also felt the sting of Internet trolls.

She shot to fame in 2016 to protest the changes being proposed by Health Secretary Jeremy Hunt.

Jamie Bartlett, the Director of the Centre for the Analysis of Social Media at the think-tank Demos, where he specialises in online social movements and the impact of technology on society,Lucinda Belle,harpist, singer and songwriter, and filmaker Max Joseph,perhaps best known as the co-host of the MTV reality TV series entitled “Catfish: The TV Show” which investigates the murkier end of the online dating world.

Tickets are available here and it all starts at 8.30am on the 11th Feb

Contract written 800 years ago to be displayed in Wigan

Two iconic architectural gems to be celebrated in new exhibition