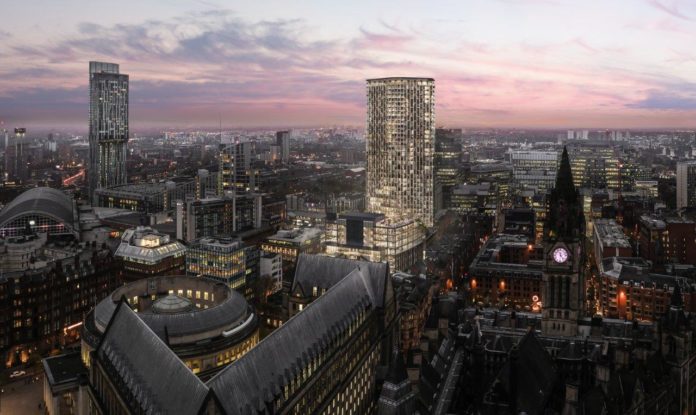 Design refinements to the £200 million St Michael’s scheme have been submitted to Manchester City Council.

It comes as Laing O’Rourke is officially announced as construction partner on the project, with the start-on-site date set for late summer 2020.

There will also be more than 163,000 sq. ft. of office space, 22,722 sq. ft. of leisure space – including an outdoor rooftop terrace – and a boutique five-star hotel in the former Bootle Street police station, which will retain its frontage.

The next stage of the detailed design process has been completed by the team and Laing O’Rourke has been an integral part of this, supporting the design, quality, form and function set out in the planning consent.

This has been successfully achieved and the project team behind St Michael’s is now taking forward the final phase of detailed design and procurement.

As with all design development there have been some refinements required during this phase of design, as the scheme moves towards construction works commencing on site.

A number of relatively minor improvements to the original scheme have been identified; these represent design, functional and operational improvements.

“The level of input given by them and the team really puts us in a good position to progress swiftly with the final stage of design early in 2020.”

Stephen Hodder MBE, Chairman of Hodder + Partners, said: “I’m pleased that the design development supports the original consented scheme. It was so important to us that during this stage the team maintained the quality, scale and volume of the consented plans, which we have successfully achieved.”

Céire O’Rourke, Laing O’Rourke Director, said: “We are delighted to have been appointed by St Michael’s Partnership to deliver what will become a landmark development in Manchester’s city centre. We will be using modern methods of construction with a high percentage of the development being manufactured off site and assembled on site. These methods, known as Design for Manufacture and Assembly (DfMA) minimise disruption, vital in such a tightly constrained site and give the client more certainty in terms of the programme timetable.

“Our established Manchester team; some of whom have been responsible for delivering projects across the City including the Central Library and Town Hall extension refurbishment, Manchester Metrolink and The Henry Royce Institute look forward to starting on site this year.”

Green light given for £3.1m boost for walkers and cyclists in Salford