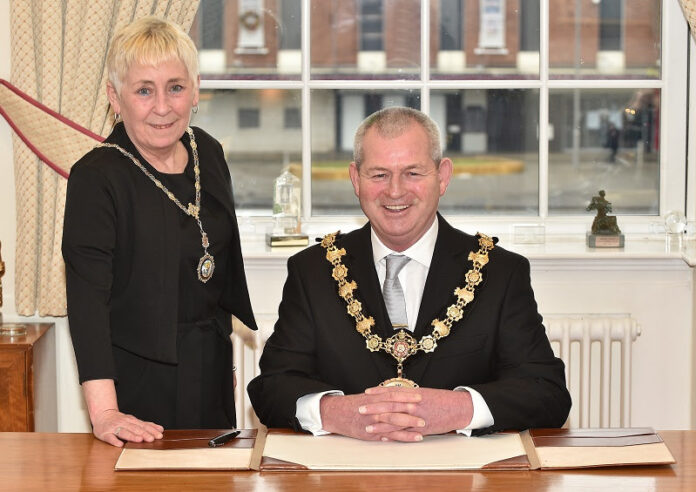 Salford IT expert Councillor John Mullen will have a whole new set of commands to programme into his Alexa – ‘manage my diary.’

Councillor Mullen, who represents Barton ward, will today (Wednesday January 20) be sworn in as Salford’s Ceremonial Mayor with his wife Michelle as Mayoress.

The ceremony, which should have taken place last May, has been delayed because of the pandemic. Councillor Mullen paid tribute to outgoing Ceremonial Mayor Councillor Charlie McIntyre saying he had gone ‘above and beyond’ to serve the people of the city.

“I’m delighted to be taking over the chains of office and I hope to be able to get out and about to meet people later this year as more people are vaccinated and we beat the Coronavirus pandemic,” said Councillor Mullen.

After leaving St Albert’s RC High School in 1976 Councillor Mullen became an apprentice glazer before switching trades and qualifying as a welder. In 1984, newly married to Michelle  and with the arrival of their first son Kelvin, he taught himself computer programming and completed a BTEC at Worsley College.

“Two years later we had our second son Jonathan and I was working at a private car park. The manager was struggling with one of the first IBM computers, so I offered to help. I re-loaded it and wrote a programme that cut three days off the manual billing programme. He told me I was wasted in that job and found me my first computer job at Provincial Bank,” said Councillor Mullen.

From there he went on to work for an American credit company regularly travelling to America, Japan and Europe and complete a degree in computer science and professional qualifications with the British Computer Society. He later became self-employed and worked for the Office of National Statistics, Sainsbury’s, Walmart before semi-retiring last year.

Councillor Mullen joined the Labour party in 2001 to campaign for better health services and has represented Barton ward since 2004.

In his spare time Councillor Mullen enjoys travelling, watching Star Trek and other sci-fi programmes and playing computer games and programming Alexa with his grandson Jack.