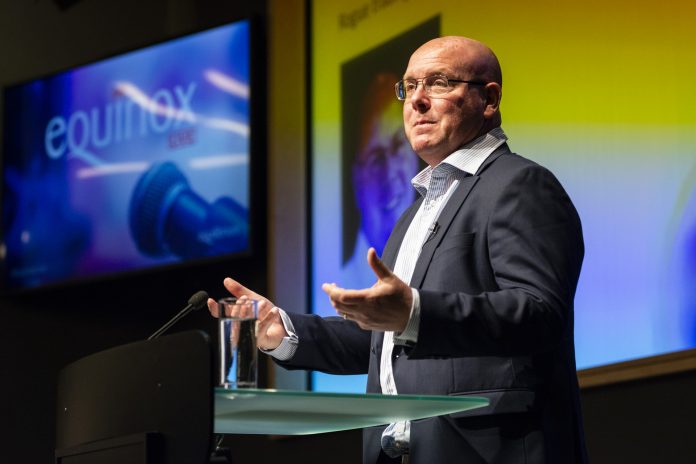 Held at Alderley Park The Real Hustle’s Conran and infamous Rogue Trader Leeson – who single-handedly brought down England’s oldest bank, Barings, in 1995 and subsequently spent four years in prison – each spoke about their compelling life stories.

A handful of Greater Manchester-based 10 to 14 year olds from international educational charity Debate Mate also wowed the crowd during a live debate on whether the rich should pay more tax.

Kicking off the conference, Equilibrium founder Colin Lawson – whose Wilmslow-based company manages over £800 million of assets for over 1,000 families – told the crowd that Equinox Live had been designed to ‘inform, educate and entertain’.

Keynote speaker Leeson, who was played by Hollywood star Ewan McGregor in 1999 British biographical drama film Rogue Trader, described his life as “a cautionary tale of what can go wrong if you don’t manage things correctly”.

“When it comes to my story there’s so much to be learned,” said Leeson, whose talk also touched on his personal insights into the economy.

“But it always comes back to recruiting the right people and having the right controls and processes in place.

“From Equilibrium’s perspective it’s clear how transparent they are. You can see how close Colin still is to the business. And I’m sure the senior board are as well, which has to be the case.”

In between showing clips of scams on his BBC show The Real Hustle, Conran added: “It’s natural instinct that we all behave similar to what others are doing around us, a herd mentality.”

He said: “An economist who can’t predict a recession is a little bit like a nature guide who knows a lot about the plants and trees but hasn’t spotted the fact that there is a bear stood behind you.

“I think where economists are going wrong generally, apart from the fact that a lot of theory they teach at university and school is wrong, is trying to forecast further out than is possible.

“The focus should be on what historically has done a good job of warning you that you are getting to that turning point where the economy is about to go into recession and with it you are going to have a bear market.”

The penultimate speaker at Alderley Park’s Equinox Live was behavioural economist Greg Davies, who focussed on ‘action bias’ when it comes to investing, and the temptation, particularly under moments of stress, to be seen to be doing something rather than doing nothing.

“The problem with this, is it’s one thing to fail to save a goal while diving spectacularly in the wrong direction. It’s quite another not to save a goal when you’ve stood in the middle like an idiot doing nothing.”

The company, which now employs 78 staff and turned over more than £7 million at the end of its last fiscal year in 2017, was also named in the top 10 best small companies to work for in the UK by The Sunday Times for the second consecutive year.

Speaking after Equinox Live, Equilibrium founder Colin Lawson said he was delighted to have brought the event to life.

“Our general ethos is to constantly evolve and adapt whilst allowing us to deliver the best and most efficient service to our clients.We feel the creation of Equinox Live very much fitted with the ethos.”