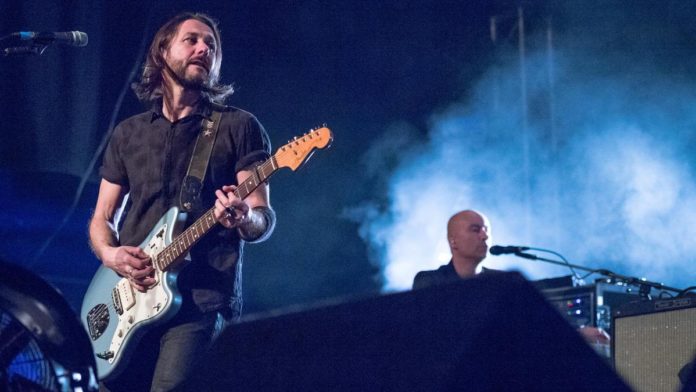 Following the recent release of their 10th studio album, Welsh band Feeder are set to tour the country throughout November, including playing the Manchester Albert Hall on 16th November 2019. Manchester music blog The Journalix caught up with Feeder’s lead man Grant Nicholas to talk to him about a long successful career in music…

You have a new album Tallulah, the majority of which was recorded at your home studio. With children, how do you stay focused?

Grant Nicholas: My kids are a bit older now so I can get more work done. My wife is around also to help so I have managed to find a happy balance. I find it quite inspiring watching them from my home studio The Treehouse when I’m doing vocals.

You’ve said the album is about making music in the age of social media – is it a better environment to work within now or more challenging?

Grant Nicholas: I think it’s taken a lot of the mystique out of the business but it can be a handy way of getting music and information out there to the masses. I would be lying to you if I said I preferred it to the way it was, but I think you can use it in a way that feels comfortable to connect with the fans.

At the height of the band’s success in 2002 original member of the band and drummer Jon Lee committed suicide in his Miami home. He was 33.

How close were you to walking away from music after his passing?

Grant Nicholas: It was a really tough time and I dealt with it by locking myself away and writing songs. The end result was [multi-award-winning LP] Comfort in Sound and that’s when [bassist] Taka and myself decided to continue as Feeder.

You’ve got a longstanding association with Japan. Is there anything from Japanese culture you feel Britain needs more of at this time?

Grant Nicholas: Japanese people have good etiquette and are very trust worthy so I guess we could learn from that. The food and fashion is also great there, anything goes.

It could be argued your music has crossed between genres over the years but it’s always been anthemic, what’s the secret formula?

Grant Nicholas: I just love melodic and more anthemic songs. It’s always been a big part of our chemistry and the way I tend to naturally write songs. Sometimes it’s also nice to rock out or do a more stripped back acoustic song. Most of the Feeder songs start out on acoustic.

What have been the “pinch-me” moments of your career so far?

Grant Nicholas: Touring with U2, REM and the [Rolling] Stones and also being on the same festival bill as [Red Hot] Chili Peppers and Foo Fighters. The Comfort in Sound arenas tour was a real career moment also.

Feeder supported Stereophonics at the MEN Arena in 2001, but how does Nicholas feel musical events on that scale have changed since the 2017 Manchester bombing?

Grant Nicholas: I definitely think about security a lot more nowadays but I don’t think it has effected me as a performer.

Are you a particular fan of Manchester music?

Grant Nicholas: I love a lot of Manchester bands and it’s also a great city and still a loyal fanbase for Feeder. I remember seeing Stone Roses in their earlier days when I had just moved to London and there was a real buzz in the air. Oasis have some great songs and I have met Liam and Noel a few times over the years. Doves are great also to name but a few. The people of Manchester always seem to embrace guitar bands and love a good tune.

Do you have any plans to return to your solo projects? What does the future hold for Feeder?

Grant Nicholas: I am focusing on Feeder at the moment but may do another solo album if there is a window in the future. Feeder is my main priority and I am looking forward to the November UK tour. Next year we are planning more shows and festivals in the UK, Europe and overseas.