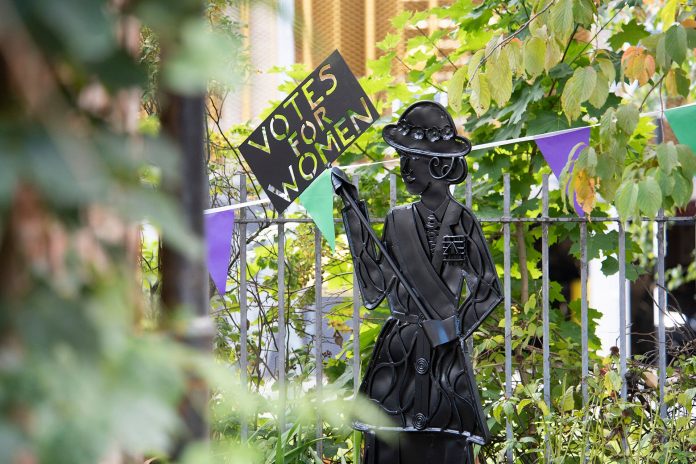 A garden has been opened at the Pankhurst Centre in Manchester to commemorate the suffragette movement and all those who have fought for women’s equality. Many of the hundreds of people who have supported the crowdfunding campaign to create the garden were there to join in the celebrations, which were led by Pankhurst Trust patron Sally Lindsay, the Lord Mayor of Manchester Councillor June Hitchen and garden designer Janet Leigh.

Creating the garden has been part of the Pankhurst Trust’s vision for its 2018 programme of activity, which has been made possible thanks to the support of over 500 people who gave their backing to a crowdfunding campaign that raised over £24,000 in late 2017 – exceeding the original target by 20%.

Stockport-based Garden Designer Janet Leigh has created a scheme that tells the story of the incredible women who won the vote, as well as giving a tranquil, therapeutic space for the women and children who use Manchester Women’s Aid, which is also located at the Pankhurst Centre.

The design and structure of the garden is based on Edwardian knot gardens as a reference to the era in which Emmeline lived in the house with her family. The restrictions and confinements experienced by women of that time, and which the Suffragettes were fighting against, are reflected in the structures of the box hedging. Planting contained within these spaces is white, purple and green mirroring the colours adopted by the suffragette movement, with many varieties having women’s names. Red planting is interjected to symbolise the hardship, personal sacrifices and the loss of life which the women endured as part of their fight for equality. An ironwork figure depicting a suffragette provides a centerpiece to the design and quotes connected to the movement are dotted throughout the garden.

Janet Leigh, garden designer, says, “It has been a privilege for me to honour the women who fought such a relentless battle for equality, a battle they would never truly see the benefits of. I am in awe of their dedication to keep fighting. A 100 years on, their work enables me to get up in the morning and do the job I do.”

Gail Heath, Chief Executive of the Pankhurst Trust, says, “When we were planning how to mark the centenary of Votes for Women, a garden seemed like the perfect fit, providing both a lasting tribute to the work of the suffragettes and a living and breathing space of peace and reflection in the city. Janet has done an incredible job of translating the story of the suffragette movement into a wonderfully inventive and visually arresting outdoor space and we can’t wait to share it with everyone who visits us. We’d like to see this as one of the first steps in the Pankhurst Centre’s evolution into a major visitor attraction celebrating the significance and legacy of those who have fought for, and are continuing to fight for, female equality.”

You can visit the Pankhurst Centre on Thursdays from 10am-4pm and on the 2nd and 4th Sunday of each month from 1pm-4pm. It is able to open during these times thanks to the support of its volunteers. If it’s campaign is successful, and the building is restored and developed, the Pankhurst Centre will become a museum and creative space that opens daily with an active programme of events and activities taking place.