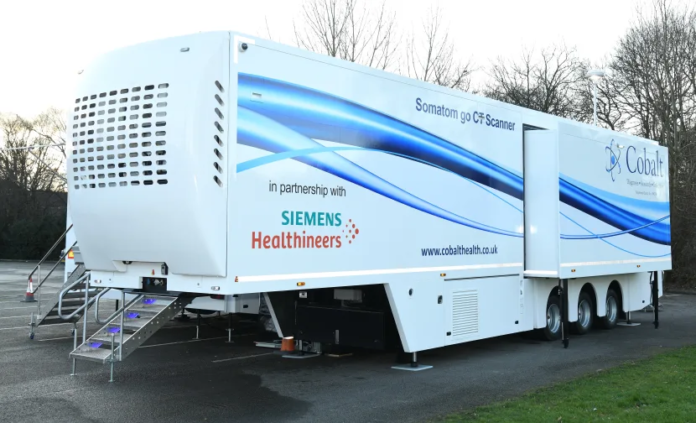 Hundreds of people have been diagnosed with lung cancer earlier through NHS mobile trucks, as part of the biggest programme to improve early lung cancer diagnosis in health service history.

Thanks to NHS teams who are making it even easier for people to get a Lung MOT in travelling trucks visiting different areas across the country, 600 people have been diagnosed earlier.

People diagnosed with lung cancer at the earliest stage are nearly 20 times more likely to survive for five years than those whose cancer is caught late.

Mobile trucks are scanning those most at risk from lung cancer, including current and ex-smokers, inviting them for an MOT of their lungs and an on the spot chest scan for those at highest risk.

Today, NHS cancer chiefs are urging those most at risk of lung cancer to come forward as soon as they are invited for a life-saving health check, to help even more people benefit from early diagnosis.

The call comes as new figures show only a third (35%) of patients go to their lung health check when invited by the NHS.

A further 20 NHS lung truck sites are due to go live shortly with the capacity to invite 750,000 more people at increased risk for a check, in efforts to catch thousands more cancers at an earlier stage.

So far, the 23 existing truck sites have issued up to 25,000 invitations every month.

As set out in the NHS elective recovery plan earlier this year, the NHS will increase capacity to deliver around 17 million diagnostic tests over a three-year period.

Dame Cally Palmer, NHS cancer director, said: “These lung checks can save lives – by going out into communities we find more people who may not have otherwise realised they have lung cancer – with hundreds already diagnosed and hundreds of thousands due to be invited.

“The trucks are conveniently located to make them easy to access and it is vital that as soon as you are invited, you take up the offer and come forward for these potentially life-saving checks.

“The rollout of our Targeted Lung Health Check Programme is a huge step towards reaching our NHS Long Term Plan ambitions of catching thousands more cancers at an earlier stage when they are easier to treat”.

Rolled out as part of the NHS Long Term plan, NHS lung trucks visit convenient community sites including supermarket carparks, sports and shopping centres, and carry out targeted lung health checks in areas of the country that have some of the highest death rates from lung cancer as part of a major drive to catch more cancers earlier and save lives.

Not only do the lung trucks scan for cancer, but they’ve also identified thousands of people with other undiagnosed conditions including respiratory and cardiovascular disease, enabling them to access the treatment they need earlier, and helping to prevent potential hospitalisations.

The elective recovery plan set out a blueprint to address backlogs built up during the pandemic, as well as tackling long waits for care.

Overall, as many as 1.5 million people will have been invited for a lung health check across the country by 2024/25 with an estimated 7,700 cases caught earlier under NHS Long Term Plan.

Professor Peter Johnson, NHS clinical director for cancer said: “Lung cancer can often be hard to detect at an early stage and so these checks, close to people’s homes, show how the NHS is taking action to find more people with cancer.

“Lives are saved when cancers are caught early and when more people are referred for tests, which is why the NHS has put so much effort into early diagnosis in recent years.

“We know that some people had concerns seeking help during the pandemic but if you do have a worrying symptom or have been coughing for three weeks or more, please do contact your GP and get checked out”.

Current and ex-smokers aged between 55 and 74 are invited to speak to a healthcare professional and, if they have a higher chance of developing lung cancer, are offered a scan of their lungs.

Trucks move around each community to reach the most at-risk, with a truck in the North West shifting between Blackburn Rovers and a sports centre in Blackpool, while close to the capital, they have been offering more people the chance to get a vital check in Luton and Thurrock.

Advice to help people stop smoking is also provided to those who attend.

Smoking causes more than seven in ten lung cancer cases in the UK. Previous trials have shown that CT screening reduced lung cancer mortality by 26% in men and between 39% and 61% in women.

If anyone has symptoms of lung cancer, they should visit their GP straight away and not wait for a lung health check.

Health and Social Care Secretary Sajid Javid said: “I am committed to radically improve outcomes for cancer patients across the UK and our 10-Year Cancer Plan will set out how we will lead the world in cancer care.

“We are also supporting the NHS to tackle the backlog with innovations such as community diagnostic centres which are delivering millions more tests, reducing pressure on other services and allowing people to be seen more quickly.

“This community scheme is exactly what we need to ensure hundreds of people get an earlier diagnosis, allowing them to get the treatment they need as soon as possible”.

Christine and Danny, a couple who both went through the check and stopped smoking after Danny was diagnosed with lung cancer, said: “We received an invitation letter and are so thankful that we made the decision to go ahead with the lung health check. Unfortunately, the CT scan picked something up on Danny’s lung and within days we were at Castle Hill Hospital receiving a lung cancer diagnosis.

“He had no symptoms other than a cough, which we naturally put down to smoking, and we were shocked to find out the growth was really large. We were so lucky, the lung health check caught it just in time and the amazing cancer team at Castle Hill Hospital were able to operate and remove the cancer without need for chemo or radiotherapy.

“Danny is now completely cancer free, but if it wasn’t for the lung health check, he simply wouldn’t be here today. We are so grateful to the amazing team who saved my husband’s life and would urge anyone who is invited to take up the offer”.

How boccia champ Sam is ‘living well at home’