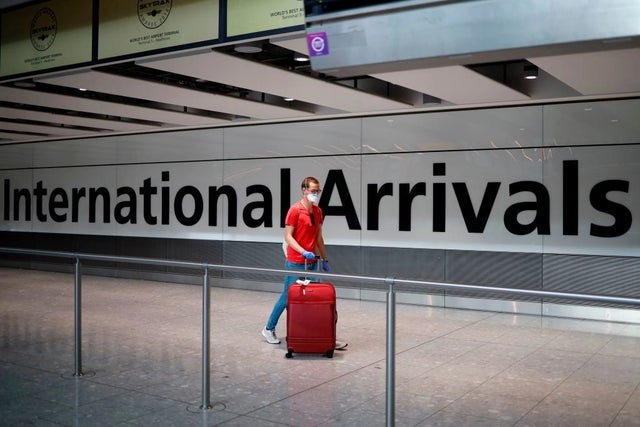 The Home Secretary has announced that from June 8 international arrivals would be subject to a 14-day period of isolation and that no air bridges will be on the horizon until the first review on  June 28.

Priti Patel : “It is really important for the British public and members to put this into perspective.We are in a national health emergency right now. This isn’t about the inconvenience of certain regulations and measures – we are here to make sure we protect public health first and foremost.”

Her plans have come under attack though from Conservative back benchers.

“I’m afraid I simply cannot get my head around the public health mental gymnastics of this policy. If such a barrier was required, why was it not introduced earlier in the outbreak and if it is a contingency measure against a so-called second wave, why apply it to countries with a lower infection rate than we already have?
“Surely the answer lies in the Government’s test and trace system rather than unnecessary economic isolation.”

The scientific advice has been consistent and clear, Patel said adding that we are past the peak – but now more vulnerable to infections being introduced from abroad.

She says quarantine would have made little difference earlier – when transmission rates within the UK were higher. But now it would help

Arrivals will need to fill out a “contact locator form” with details of where they will isolate and how they can be contacted, the Home Secretary says.

The form must be completed in advance of travel and Border Force will be “at the frontline” of enforcing it. There will be spot checks at the border and have the power to impose a £100 fine for those who do not comply.
Data will be used by Public Health England who will undertake checks, and if they have reason to believe people are not following the rules, they will inform the police.

CBI President, John Allan, has called for an evidence led approach to be taken to the end of June review.

The review must be health led. But it is also vital to understand the impact of quarantine on prosperity across the UK. A blanket approach to quarantine for international arrivals will have major implications for businesses as well as the airlines, airports, ports, and rail and ferry operators who are significant regional employers. These sectors are already disproportionately feeling the effects of the economic downturn.

But the impact will be felt across the economy. From manufacturing to financial services, firms are clear that under the current plans, they are struggling to plan ahead for the movement of workers to service and sell their products. The long-term implementation of the 14-day quarantine as it stands will make them less competitive at a critical time.

Manchester will light up Wythenshawe Hall tonight in solidarity with those protesting for...