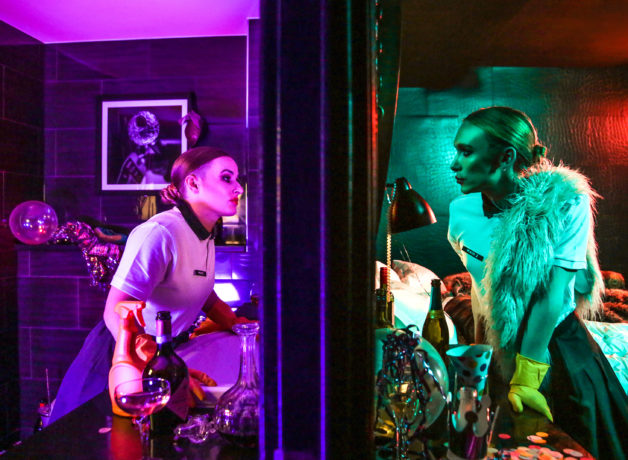 Based on the true story of murderous duo The Papin sisters, Genet’s infamous The Maids is a radical modern classic. Well ahead of its time, it explodes with contemporary ideas about class conflict, sexual identity, and political outcasts.

In the title roles at HOME are Jake Fairbrother as Claire and Luke Mullins at Solange. Jake’s many theatre credits include The Lady From The Sea (Donmar Warehouse), Twelfth Night (Crucible Theatre), The Last Days of Troy (Globe Theatre and Royal Exchange Theatre), Macbeth (Cheek By Jowl), A Life of Galileo, The Orphan of Zhao and Boris Godunov (all Royal Shakespeare Company) and Hamlet (National Theatre). His films roles include Skyfall, Stratton, and Sandcastle, and on TV has appeared in NW and Holby City.

Danny Lee Wynter completes the cast in the role of Madame. His theatre credits include Cell Mates (Hampstead Theatre), Forty Years On (Chichester Festival), The Glass Menagerie (Nuffield, Southampton),Comus, Bedlam, Henry IV Part I, Henry IV Part II, King Lear, and The Front Line (all Shakespeare’s Globe), and The Miser (The Royal Exchange). His TV credits include Walliams and Friends, The Dreams of Bethany Mellmoth, Partners In Crime, Episodes, Mr Stink, Luther, Joe’s Palace and Capturing Mary. Danny is also a Founder of The Act For Change Project which aims to strengthen diversity in the live and recorded arts.

HOME transforms its main house theatre for The Maids into the round for the first time. Building over the stalls seating area, the stage will be raised up to the height of the circle – and audiences will be able to watch from both on and off the stage in a specially built seating area.

Genet wrote The Maids in 1947 whilst serving a prison sentence, as an imaginative and intellectual escape. Premiering the same year, Genet’s chilling tale follows the story of a pair of maids who create violent, darkly humorous fantasies while dressed in the opulent clothes of their mistress. Indulging in theatrical re-enactments of the power structures which define their lives, the line between make-believe and reality becomes increasingly distorted, as it becomes clear that the aim of the game is murder…

She comments: “With the political climate in the UK and around the world as it is, a story about two opposing classes, whose antagonism is fuelled by their inability to understand each other, resonates strongly. In the prison of social conditioning, the only escape open to these characters is through violent action. I’m very excited to be directing this play, which has all the utopian and subversive power which theatre can have, in the UK and to bring it to Manchester in particular.”

Martin Crimp’s translation of The Maids was first staged at the Young Vic in 1999. His new play, When We Have Sufficiently Tortured Each Other – Twelve Variations on Samuel Richardson’s Pamela, starring Cate Blanchett and Stephen Dillane, opens at the National Theatre in 2019.

Alongside the main house theatre production of The Maids, HOME is delighted to announce its accompanying France Now season in its Theatre 2 space between Tuesday 27 November 2018 – Saturday 1 December2018. Following the success of its previous Berlin Now and Cuba Now seasons celebrating thrilling, emerging work from these regions, HOME invites three young companies to take a close-up look at life on the other side of the Channel with three contrasting performances all highlighting the charms and challenges of life in France.

Ballet Bar is the hit show from Off Avignon Festival in France, featuring a company of six hip-hop dancers who mix mime, physical comedy, acrobatics and a century of dance styles inspired by Calypso, Charleston, Tango and Electro. Charming play for all ages J’ai Trop Peur (I’m So Scared), written and directed by David Lescot, is a heart-warming, adolescent drama about the challenges of friendship, school and growing up. It was commissioned by the Theatre de la Ville and has toured extensively throughout France.

Concluding the season is Submission, a newly commissioned adaptation, directed by Teuknie. Written by Michel Houellebecq, France’s best-selling controversial author, it imagines a France of the near future under Islamic rule following the election of a Muslim president. This provocative, clever and mischievous piece, performed as a Scratch Performance, offers a profound reflection and satire on the lack of faith and meaning in western society.

France Now is kindly sponsored by the Institut Français du Royaume Uni as part of the En Scène! Programme – helping to present work across Greater Manchester by some of France’s leading artists covering all spectrums of performing arts.

Manchester’s Monastery Re-opens to the Public