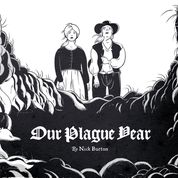 HOME’s main gallery will reopen on 24 October with three simultaneous solo exhibitions, giving visitors the opportunity to discover a trio of artists taking three very different approaches, but all using illustration at the core of their practice.

The gallery reopening will mark the moment when all three of HOME’s artforms – cinema, theatre and visual art – will have returned to the building following the coronavirus shutdown.

Nick Burton, Joy Yamusangie and duo Mike S Redmond & Faye Coral Johnson will all present separate exhibitions, tied together by the medium they use, but varying hugely in their approach and subject matter. For audiences starved of visual art during lockdown, it will provide a visual feast after a period of famine.

Visual art is the final artform to return to HOME following a phased reopening which began on 4 September with film screenings resuming in a socially distanced manner and will continue from mid-October with the return of live theatre to HOME’s stage.

“Art never left but adapted and evolved,” says HOME Curator, Bren O’Callaghan. “From online distribution to frantic final editing and composition of forthcoming premieres, we’re fortunate in that we haven’t had to cancel any exhibitions by rescheduling and reshaping, although our opening show is an entirely new addition to the slate.

“It’s unheard of to turn around a main gallery exhibition in just a few months, but a little creative thought can be applied to any situation – given the opportunity, we’ll turn the apocalypse into an urban watercolour meet-up.”

And while the artists’ styles are very different, Bren believes that the unifying use of illustration is the perfect route to explore for these uncertain times.

Bren continues: “The start point was our commission with Nick Burton during lockdown of Our Plague Year, which spoke to me of the capacity for illustration to operate as a Trojan horse. Seemingly childlike in technique, illustration possesses an underrated capacity to express complex political, social and even spiritual commentary.

“Each artist presented in our main gallery makes use of this ‘sugared pill’ at a moment when we require comfort and reassurance, but must face what lies beneath – be it cruelty, a desire for connection, or chaos.”

Nick Burton’s exhibition, Our Plague Year, is based on the hugely successful online comic of the same name, commissioned and launched by HOME during lockdown. Quickly gathering thousands of international subscribers, a Prologue consisting of the first dozen weekly episodes are presented here, alongside exclusive new material.

The comic is an alternative retelling of life in Eyam in 1665-66, when the local community made the decision to quarantine themselves to prevent the Plague from spreading. It’s a story of self-isolation and social distancing, told through the eyes of fictional characters, commenting on how an isolated village in lockdown brings out both the worst and the best in its people (mostly the worst).
Nick is an illustrator and storyteller living in Salford, England, who works on both personal and commercial projects. His comics and illustrations have been featured in Wired, The New York Times, Ride Journal, GQ and more. Nick’s recent comic tale of a lost bicycle, Lily (told from the perspective of the bicycle), was a finalist in the recent Manchester Open Awards 2020 at HOME.

Joy Yamusangie is a visual artist, working in London. Specialising in illustration, Joy experiments with a range of traditional processes such as drawing, painting and collaging to produce mixed media pieces. Exploring socio-political themes from a personal perspective, Joy’s work takes the form of paperworks, clothing and paintings on cardboard. Their work explores themes of memory, intimacy, race and culture within the Congolese diaspora, from a personal perspective.

Drawn from a palette of dreams, memories and hopes, Blue Glass Fortunes is inspired by a vision of blue goblets with candles set inside, flooding a room with light. The meaning remains unknown, revealed with future hindsight. Adrift in an ultramarine ocean of love and loss, we float suspended – no longer asleep, but not yet awake.

In rejection of conventional attitudes towards art, Mike S Redmond & Faye Coral Johnson (MSR FCJ) consciously push experimental ideas of making in order to discover new and surprising processes and outcomes. With a desire to challenge themselves, they adopt a mischievous, spontaneous approach.

Taking root during a residency at Hospitalfield House in Arbroath, Scotland, Bubbling Pitch surfaces as a series of transitional drawings, paintings and a limited edition book. With a conscious disregard for any accurate representation, the artists instead pursue an intuitive, eccentric response to their time spent wandering the hallways of a dead person’s dark, dream castle.

Bren O’Callaghan adds: “All featured artists employ an unapologetic use of graphics and illustration as core to their practice, whilst the effects of working in isolation – be it in direct response to lockdown, or the continuing pursuit of an acutely personal journey – is also present throughout. The use of abstracted and playful figuration invites a closer reading, although a mirror can deceive as well as document.”

Entry will be free, but via a timed and ticketed system to allow for social distancing. Slots can be booked via the HOME website, by phone or in person from Thursday, 24 September.